The PM must step in

After what went down on Republic Day and the build-up of barricades with nails, iron bars and concrete walls at different protest sites, the need of the hour is de-escalation. 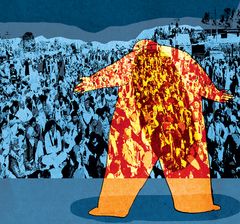 Yes, the violence on January 26, especially the unfurling of the Nishan Sahib at the Red Fort, was utterly appalling, as was the breaking down of barricades and the violence that ensued. But, the farmers I meet are convinced, right or wrongly, that extremists like Deep Sidhu, who can be seen on video exhorting men to put up the religious flag, were given a long rope by the police, just to discredit the movement.

Either way, the movement has shifted gears and momentum from the primarily Sikh-led, Punjab-centric agitation to the mobilisation of Jats in western Uttar Pradesh. Farmer leader Rakesh Tikait, who told me he voted for Prime Minister Modi, pulled a rabbit from his hat by breaking down in tears and giving a call to action for farmers to arrive at the UP border. The police, sent in to clear the area of protesters, immediately stepped back, sensing the pointlessness of going eyeball to eyeball with a large crowd.

Every police officer, retired and serving, that I have spoken to, believes the force is being made to carry the cross for the political establishment. Clearly, both the decision to allow the tractor rally to roll into Delhi on Republic Day, and the decision, since then, to fortify the protest sites as if they are war zones, are political. Amod Kanth, former top cop of Delhi, told me that the images are “horrifying” even as he understands the need for the police to act. “But can we afford to have Delhi turn into Tiananmen Square?” he asked.

There is peril in the fact that the farmers’ agitation is leaderless or at least without one central leader or group. It leads to the sort of free-for-all fracas we saw on Republic Day and the subsequent dissociation. Even the involvement of Rihanna, the international superstar, who tweeted about the internet shutdown at the borders of Delhi, is beside the point. Chances are if she were quizzed about the legislation or the protests she would not know too much.

But instead of getting prickly about outside commentary, as the foreign ministry has, the prime minister needs to step in. Not because of what the western media or Hollywood celebrities are saying, but because thousands of men and women, elderly and young, have been on the roads for over two months. And for the most part, they have been peaceful and dignified in the articulation of their opposition.

At Singhu border, the farmers told me they will stay as long as needed. The women said they will not budge, “even if we die”. But everyone is looking at Narendra Modi to step in. “If he comes here to talk to us, we will give him chai, samosas and ladoos. Then we will ask him to repeal the laws.”

Parliament is in session. The prime minister must intervene and pull the street back from the precipice.