Depending on which economist you speak to, you can be persuaded either way on the new farm laws. Ashok Gulati, who has spent a lifetime studying the agricultural space, makes a passionate case for why these reforms are needed and how, as he told me, “you cannot fight the force of a free market. The government cannot be in the perennial business of deciding the price of potatoes and onions.” On the other end of the spectrum is P. Sainath, veteran journalist and chronicler of rural India, who argues that instead of eliminating the middleman, the new laws will throw up “new touts who will wear Gucci and Armani”. The reference is to what journalist Harish Damodaran has called “conglomerate capitalism”—where the market, instead of being genuinely free, is dominated by a handful of giant corporations.

For the layperson this is a confusing argument. Not all of us are trained policymakers or economists to be able to decide whether the legislation will do more good than harm. However, the lessons from the telecom sector are instructive. What was meant to be an opening up of a competitive market has ended up in only three players left in the market where the third is still fighting to survive. 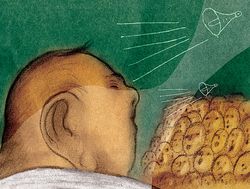 That said, if you did a dipstick test, most Indians would stand in solidarity with the protesting farmers. It is in fact possible to be confused, even ignorant about the exact provisions of the new farm laws and still sentimentally lean on the side of the farmers.

There is a reason for this. First, if the laws are meant to improve the lives of the farming community—60 per cent of India’s population is dependent on agriculture—then the people being “gifted” must believe so. If there is a gap in communication, and men, women and children are on the street—every village in Punjab is reported to have sent a tractor load of protesters to the capital—it is incumbent upon any government to talk with the citizenry and not talk down at them.

As Gulati, who is a supporter of the laws, told me, “the prime minister should go and eat in the langar being run by the farmers and share a jalebi or two with them”. The first instinct of the government to disparage the protests was the wrong one.

There is also another missing piece of the puzzle. From the prime minister downwards, everyone in the government has assured the farmers of the MSP, or minimum support price, continuing despite the new laws. Farmers do not believe this and want it in writing as a legally enforceable guarantee. Of course, MSP varies from year to year and is in the realm of administration. But if the government is indeed sincere about maintaining the mandis and the MSP system in parallel to allowing private players in, it should have no problem in giving some manner of assurance that is formal and goes beyond the verbal.

In effect, the debate around the farmers laws is not about the legislation at all anymore. Even those who think the new acts have value may believe that the farmer on the street deserves a dignified dialogue of equals.