Crisis at the core

It would be a mistake to see the Rajasthan political crisis as a story bound by geography. At one level, yes, it is about an old warhorse of politics, Ashok Gehlot, being challenged by a second-generation leader, Sachin Pilot. But more than what happens eventually in the state—and a lot will depend on whether Pilot and his rebel MLAs are disqualified by the court from participating in a trust vote—this is a story about the state of the Congress party. And, once again, it is a story that shines a light on the leadership crisis within.

There can be more than one reading of whether Pilot played his cards right. And Gehlot, by virtue of being an old-style politician who is not easily outfoxed, may well win this round. Audio tapes released by the Congress allege that Pilot’s aides were in contact with senior leaders of the BJP for a bargain to switch sides. I also believe that Pilot made a mistake in a half-way exit, keeping one foot inside the door and one out of it, as he declared that he was still a Congressman. Instead, he should have walked out neatly and outright. Similarly, Gehlot’s use of debasing language (“nikamma, nakaara”) vindicated Pilot’s claim of being shown no respect. 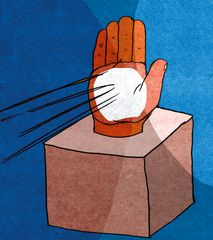 But no matter what side of the Gehlot versus Pilot battle you are, it has split wide open the fissures within the Congress and exposed its real problem—the decision-makers at the very top.

The Gehlot camp and the Pilot camp both aver that the central leadership of the Congress—the Gandhi family—has been alerted to the growing divide between the chief minister and (ex) deputy chief minister for months. The one thing that both men would agree on is the ineffectual response from their leadership in Delhi.

We know now that it was not Sonia Gandhi or even Rahul Gandhi, but Priyanka Gandhi Vadra who worked the phone lines to Sachin Pilot. But nobody knows what her official locus standi to do so was. As interim president of the party, Sonia Gandhi should have been seen and heard on the issue. But she chose to remain in the background, as she has been for several months. Rahul Gandhi remained silent for most part as well, choosing instead to launch a new video series to “counter the narrative of hate”. His first video was on China and its release was the same day as the party released the audio tapes that purportedly showed evidence of horse trading and bribery. Talk about poor timing—by the evening the media was discussing Rahul’s renewed persona instead of the Rajasthan story.

In any case it has been more than a year since Rahul walked out from the post of party president. He had insisted at the time that no member of his family would take the post. That did not happen and now the ground seems to be prepared for his return.

If you talk privately to second-generation Congress leaders not one of them is happy with the state of play in the party. Many believe that Sachin Pilot will not be the last exit either.

The Gandhis can console themselves on outplaying the BJP in Rajasthan. But even that credit must go to Ashok Gehlot. The Gandhis, on the other hand, continue to be in entitled denial about the existential crisis that plagues their party.