No eyes to see, no heart to feel

As I write this I have just entered the state of Kerala after a 72-hour road odyssey that has taken me through the states of Delhi, Haryana, Punjab, Uttar Pradesh, Madhya Pradesh, Rajasthan, Gujarat, Maharashtra, Telangana and, then, Kasaragod in Kerala.

After clocking 14,000 kilometres and tracking migrant workers on their long journey home, certain facts have become indisputably evident to me. 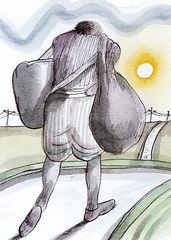 The humanitarian crisis of the migrant workers has come to be bigger than the challenge of the pandemic. In part, this is because the national lockdown was announced with four hours’ notice and failed to anticipate the biggest mass exodus of people since Partition. An absence of empathy, efficiency and basic coordination between the Centre and states also cost us. For the first 72 hours, as the workers walked, often barefoot, their children on their shoulders, they were treated as invisible by the Centre and states alike. Then there was a hasty, unplanned attempt to put them on trains, but without anyone to even organise queues before they boarded. This was a moment, frankly, for the paramilitary or military to have been called upon, used as they are to simplifying intricate and large movements of people. Instead, the sight of thousands of workers desperately jostling to get onto a train panicked the government and it issued orders that the movement of workers was a “violation of the lockdown.”

The problem with this was that no government order could ensure that workers were paid wages. Policy makers also failed to understand the twin triggers of economics and emotion when it came to the exodus. While there was an intuitive empathy for stranded middle-class and upper middle-class Indians abroad (who were not impoverished or in any danger of going hungry), there was simply no acknowledgment of the fact that the same emotional need—the need to be at home—was just as true for our poor.

Effectively, the government issued orders that were unenforceable—both on asking the workers not to move and asking their employers to keep paying them. Oddly, in March, it told the Supreme Court that there were no more migrants on the road. Workers were walking our highways, often through the desolation of the night, as recently as this week.

Every worker I have met—those walking barefoot, cycling hundreds of kilometres home, crammed in at the back of small trucks, on board trains—have all said the same thing to me. “If the virus has to kill us, we would rather die at home.” Most believe that poverty will claim their lives quicker than Covid.

In Haryana I met the family of Mukesh Mandal, who sold his phone for Rs2,500 so that he could feed his family and buy them a fan. One day later he killed himself. In Madhya Pradesh I met the widow of Ranveer Singh, who died walking home from a heart attack. In Delhi I met Fazulu, who had been locked in by his employers behind a corrugated tin sheet as if he was bonded labour. In Mumbai, at the back of a truck, I met Vinod, a science graduate, who said no one in the news media had bothered to tell their story. In Hyderabad, I met 10-year-old Sunil who was heartbroken to have to leave his textbooks behind and worried about when he may be able to attend school again. And in Bhiwani, Nitin, the 10-year-old son of a migrant worker, summed up the reality of this pandemic. What does coronavirus mean to you, I asked him. “It means I won’t get food.” He said it simply, in innocence, and after that he even smiled. But in a few words he had captured the tragedy of our times.