It took the photograph of a 11-year-old boy hunched over his father’s body for us to finally care about one of India’s most shameful human rights violations. The moment, captured by Hindustan Times reporter Shiv Sunny, brought home the tragic fate of the country’s sewer/sanitation workers, who are condemned by a combination of caste and poverty. Were it not for the heartbreaking pathos of the picture, Anil, the name of the dead man in the photograph, could have become yet another forgotten statistic in a country where one person has died every five days while cleaning septic tanks, insanitary toilets and drains and sewers.

This data compiled by the National Commission for Safai Karamcharis should make us shudder in shame. Yet, each one of us is complicit in the death of these workers—I would even use the word ‘killing’. This sort of manual scavenging was banned 25 years ago; yet there are still an estimated 50,000 workers compelled to clean putrid, suffocating drains, manholes and latrines. We are all complicit. We either look away while impoverished men and women are forced to do what we would not even contemplate, or worse, we actually employ them to clean the tanks and underground spaces in our homes for just a couple of hundred bucks. We then delude ourselves into thinking we are being fair and generous by providing an economic opportunity. We do not even pause to think that many sanitation workers and sewer cleaners die before retirement. Ninety per cent work without any protective gear and equipment and are constantly exposed not just to filth but also to poisonous gases such as methane and hydrogen sulphide. 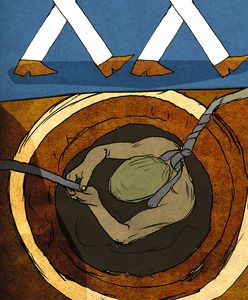 Activists like Bezwada Wilson, whose team recorded 90 manual scavenging deaths in Delhi alone in the last nine months of 2017, point out that the National Crime Records Bureau figures do not reflect these numbers, though they should. Several state governments have submitted affidavits in court claiming that there is not a single manual scavenger working in their regions. But because there has been no official survey in ten years of how many people continue to have to clean up human excreta, countering them legally becomes impossible.

This time a photograph stirred the collective conscience of people and lakhs of rupees were crowdsourced to help Anil’s family, who did not even have money to cremate him. But one-off compassion is no answer to an institutional betrayal of the very idea of democracy. That an emerging superpower has not been able to develop a mechanised, modern way to clean up our shit, and that we then socially discriminate against the same community of sanitation workers for their caste, should make us ashamed and repulsed as Indians.

What should have triggered self-loathing has instead been normalised as a professional practice, one we barely notice, unless a poignant headline screams out at us and forces us to pay attention. Yes, it is a failure by successive governments that alternatives have not been developed to erase the stain of this classist and casteist anachronism. But, we the people, are also responsible. We outrage over a million issues on social media, march in protest against violence and for equal rights. When will we come out on the streets to lend our voice to this abomination? These deaths are not accidents or coincidences or even tragedies—they are a consequence of our wilful apathy. These are killings.