I would call this the year of the big trim. When it began, our PM had long-flowing locks and beard, ala Robi babu, with a godlike aura and all-powerful image to match, as it ends, he appears to have been (kind of) been trimmed down to size. The trimming happened slowly, unobtrusively, almost as if it was hoping not to be noticed, not unlike how the price of fuel and other daily essentials moved, slowly, also hoping not to be noticed, but in the opposite direction.

So why did Modiji go in for a trim? Did he think his flowing locks would look a trifle incongruous when he alighted from his new Rs4,500 crore plane in the US to talk about big-big, important-important, world-stage type things? Or did Yogiji’s macho, monastic buzz-cut make him feel his styling was a little hairy-fairy? As he does not give news conferences we can only guess—but who can decode the workings of his mighty mind?

Some stylists had opined that the long locks were part of his pandemic look—he was so busy rushing about, doing things at the frontlines and saving the day that he did not have the time to get a haircut only! (Which is a little puzzling because then how did he have the time to get his locks so lovingly shampooed and combed out?)

So perhaps then, the hajamat was provided to him, against his will, by any number of amateur yet enthusiastic coiffeurs.

Vir Das certainly had a go at the scissors—what with his oversmart, anti-national I-come-from-two-Indias act at the Kennedy Centre. ‘I come from an India where every time we get information, we are always available to care for the PM but we can’t seem to get information on PMCARES.’

Then there is the farmers, who have been doing some pretty heavy scissor and clip over comb work on Modiji’s head right through the year. The Chinese have been chipping away pretty stolidly and may be responsible for the pretty feathery detailing at the nape of the mighty man’s neck. 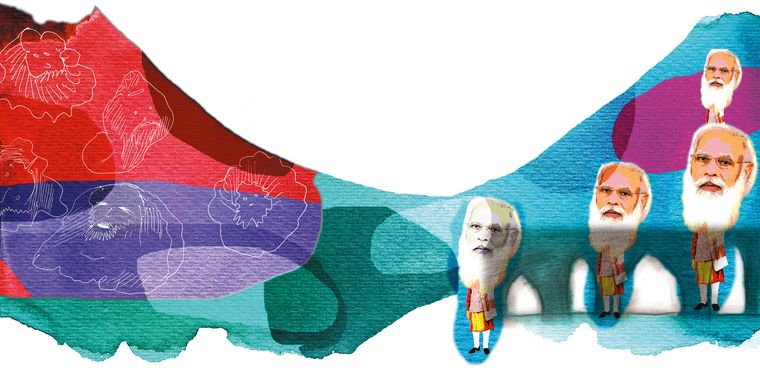 Of course the real short-back-and-sides trim was provided by Trinamool Congress head Mamata Bannerjee, who seems to have internalised Brutus’s maxim from Shakespeare’s Julius Ceaser. ‘There is a tide, in the affairs of men, which, taken at the flood, leads on to fortune.’ She seems to have grabbed the shears with a vengeance and hacked away with more force than finesse.

Luckily, this finesse was provided by Bollywood, and the dogged huddle of supporters around Aryan Khan, who stepped in to provide a sharp, elegant edge to the project.

Then there was the second coronavirus wave, which added a grim, tonsured element to the whole situation. And while the media mostly seemed to find absolutely nothing wrong with Modiji’s long locks (they find absolutely nothing wrong with anything he says or does, actually) a small band of intrepid reporters—both local and international—did have a bit of a go with the shearing scissors.

Of course, no good grooming ritual is complete without a shagun contribution from the home team, and Varun Gandhi has been providing that with increasing dedication through the year.

And so, many hands made light work, with the result that what we have before us at the eve of the new year 2022, is a not a shawl-draped sage, dreamily caressing swans, but a no-nonsense waist-coated man of action! Which is what a PM ought to be. (A PM also ought to be non-partisan and secular and consistent and answerable to the citizenry who elected him, but I will take what I can get.)

Any hairdresser worth his revitalising serum will tell you that a good, judicious trimming rejuvenates the hair. Makes it stronger, thicker, lusher and more lustrous. As head of our government, Modiji needs to have the best head of hair possible.

All in all, I approve of the new look. I strongly urge Modiji to tip everybody well.