Still have goosebumps from watching the trailer of Kabir Khan’s ’83. I have seen it four times already, and every time I watch, I am 12 again, experiencing that miraculous final unfold with my entire family in the living room of my grandfather’s old house, all of us huddled around our pot-bellied Weston TV with our hearts in our mouths.

It is a classic David versus Golaith story, the cheeky underdog daring to take on the undisputed world champion, a battle for recognition on the world stage, or as a dialogue in the trailer puts it, ‘thirty-five years ago, we won our independence, but we have yet to win respect, captain.’ 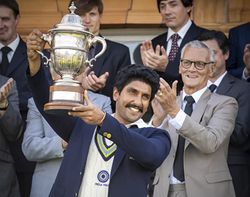 As I watch the young Kapil Dev speak his halting English and pace as lithely as a large cat across the screen, I muse that the 1980s seem like such a better, purer decade now. When we were proud of winning our independence, and did not seem to think it was given to us as ‘alms.’ When there was propaganda on TV, to be sure, but only of the benign ‘mile sur mera tumhara, toh sur bane hamara’ (when your song meets my song, then together, we create our song) national integration variety. When we kept the big boy nations on their toes with the non-aligned movement and had an actual, coherent foreign policy. When we had actively absorbed and fully bought the message of those iconic works of creative terrorism—Julie, Bobby, Zanjeer and Amar Akbar Anthony.

’83 is not the only Bollywood offering that seems to be indulging in big-time 1980s nostalgia, by the way. It is of course the most ambitious and expensive, but we have already seen heart-warming little shows like Yeh Meri Family on The Viral Fever, Yeh Unn Dino ki Baat Hai on Sony, Scam 92, the Harshad Mehta Story on Amazon Prime Video, Hotstar’s Dil Bekaraar and many more. Remixes of hit songs from the 1980s and early 1990s are back with a bang—along with lots of science and sports bio-pics set in that period.

And then there seems to be a fair amount of love for old-school shows, too. When the big general entertainment channels, unable to shoot in the thick of the pandemic and at their wits end to keep ratings high, started showing Ramanand Sagar’s Ramayan (1987) on prime time, people tuned in to watch it in droves. Internationally, Friends (which began in 1994) had a huge viewership for its reunion, and locally, the show is always in the most popular lists on Netflix India.

So why is this happening? If the achche din (good days) have genuinely arrived, if we are living in the best of times, and if we really did ‘win our independence’ in 2014, then, to mangle the song lyric ‘why the hell are we so sad?’ Why are we all going about wearing flared pants, and leg-warmers, and getting all senti about the good old 1980s? Why isn’t the smooth, beefy, nationalistic 2021 ka Akshay Kumar making our hearts go ‘tip-tip’ the way he did when he was skinnier and hairier in 1994? Is it just the usual, cyclical nostalgia that every generation feels as they age? Or was there really something special about the 1980s?

As I watch the ’83 trailer for the fifth time, and as Kapil Dev lopes down the pitch, and green and orange gulal blooms across the screen in an exact proportion of fifty-fifty, and Indian fans of every faith chant India-India together, I get goosebumps again, of course. But I also feel an aching pang, for what our India was before it got taken over by the tukde tukde gang.