BJP cannot be allowed to dumb down and weaponise Hinduism, says Anuja Chauhan

It seems like every day there is a new colloquialism for us oldies to learn. Like “finish”, for example, is the cool young people’s new word for reaching your uh, climactic peak. At the end of an intimate session, it is now de rigueur for your partner to tenderly murmur, “Did you finish?” Which is why I now find it wildly amusing to watch perspiring people bellow, “I haven’t finished!”, “If I could just finish?”, “Let me FINISH!”, on the nightly news channel panel discussions.

There is “beef” and “hook-up” and “judgy” and “cringe”. There are also more weighty terms like gaslighting, and mansplaining and cultural appropriation. But the term I was instantly appreciative of the moment I heard it, for the void it manages to fill, is “spectrum”.

A spectrum is a continuum stretching from one binary to another, a sort of sliding scale that includes all positions in between. I first heard the term in connection with autism, but now I see it being used to define so many things we earlier thought of as black and white. So, gender is a spectrum, stretching from “masculine” to “feminine”. Sexuality is a spectrum, too, and includes everything from heterosexual to bisexual to homosexual to asexual, and all the places in between. More and more relationships, too, seem to exist on a spectrum, and include all those messy, nebulous spaces that Facebook dubbed “it is complicated” and Chetan Bhagat called “Half-Girlfriend”.

Spectrum also chimes in with another phenomenon that has been cropping up recently. Hyphenation. Not just as a surname or a place of origin—like Chopra-Jonas, say, or American-Desi—but also as a personal descriptor on sites like LinkedIn. It is now increasingly common for people to straddle two or even three or multiple identities at once—actor-activist, billionaire-politician, lawyer-writer-life coach and so on.

Both hyphenation and spectrum subvert the neat, binary labelling that fascists feel comfortable around. They prefer for people to stay in their boxes—labelled Jew! Gypsy! Homosexual! Aryan! 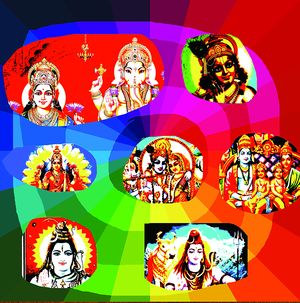 Actresses should just dance, and not have so many opinions. Farmers should just grow what they are told to grow and never demand their rights. Hindus should just donate to the Ram Temple and vote for the bearded one. Because if we are left free to explore and grow, we may discover the biggest secret of all—that Hinduism is also a spectrum.

With not just Lord Ram as the principal deity, but a pantheon of 33 million gods and goddesses, and calibrated all the way from the harsh laws of the Manusmriti to the breezy ‘you-do-you, bro’ enshrined in our Constitution (stripped of the evils of the caste system).

Come election season, a lot of liberal leaders, like Atishi Marlena, Rahul Gandhi, Arvind Kejriwal, or now Mamata Banerjee, have played what has come to be called “the Hindu card”. And while there is a lot of tut-tutting on the news channels and a lot of gloating in the BJP about how she has “blinked”, and had to speak “their language”, I am happy every time liberal leaders flex their Hindu creds. The BJP cannot be allowed to appropriate, dumb down and weaponise Hinduism. It belongs to everybody on the spectrum.

To me, the story of how Mamata Banerjee, despite being born into the ghastly binds of her “Shandilya gotra”, rose to a belief in Ma, Mati, Manush (Mother, Motherland and People) is a classic Hindu journey of a soul finding salvation.