So cute how all of America is shocked and speechless because an unnamed member of the British royal family expressed concern over how brown/black Harry and Meghan’s baby could potentially look. In India, nobody would be in the least surprised at such an un-woke, tone-deaf “concern”, especially coming from a member of the older generation. Because the first question our oldies ask upon learning about the birth of a new baby is, “Is it a boy or a girl?” And the second is, well, “Is it fair or dark?” The imputation, quite clearly, is that the order of preference goes thus: 1) Fair boy; 2) dark boy; 3) fair girl; 4) dark girl. Hmm...could the Windsors just be Walias, or Wadias, or Warsis under the skin?

Then there is the dismissive treatment they reportedly dished out to the new bahu when she came to them saying she is worried she has mental health issues and is contemplating suicide. A mixture of “stiff-upper-lip”, “get-a-grip” and “stop making excuses” that would do any old-school, desi parent proud.

There are also reports of the two sisters-in-law (or co-sisters as we call it in namma south India) being at war with each other over issues as inconsequential as the famous rasode-mein-kaun-tha. The vapid factoid that Kate Middleton wanted the six flower girls at the Harry-Meghan wedding to wear lady-like tights under their darling little bell-shaped frocks, while Meghan preferred for them to be all Bohemian and bare-legged. (A good tabloid headline could have been ‘Meghan: Naked Ambition!’ Or ‘Kate: Tight Control!’) Truly an issue worthy of a one-hour episode on any leading desi daily soap opera. You know, with all those dramatic freeze frames, triple cuts and sword-blades-slicing-through-the-air sound effects. So damningly desi!

These ladies have also been accused of “setting brother against brother” and “making” their husbands fight―like the two grown men have no shared history, or bond, or minds of their own, and can be moved like pawns by their scheming “commoner” wives. That is a desi trope if ever I saw one.

And finally, there is this whole deal with threatening to disinherit a whole, entire son simply because he wants to have a love marriage with a woman from a different, “inferior” community. Talk about Mughal-E-Azam Redux. Or Bobby 2021. Or Kabhi Khushi Kabhie Gham, Revisited. But with homelier looking leads, of course. Because let us face it, William is no Shah Rukh and the Queen (God save her) is no Prithviraj. 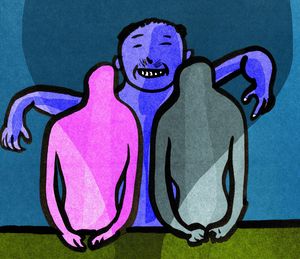 Add to that the entire joint-family ensemble cast, headed by a sweet old grandparent―in the “Ba” or “Bauji” tradition, and a chock-full of evil stepmothers, randy uncles, opportunistic hangers-on, compromised in-laws and muzzled out-laws, all of which could so easily be played out in an overdecorated haveli in Ahmedabad or Amritsar. Swap the Corgi dogs and the horses for goats and buffaloes, change the scones to samosas, the English breakfast tea to masala chai, and what you have got is something Sooraj Barjatya could have directed without even stirring out of his mirror-work embellished razai.

Still, it cannot be denied that they have managed to grab global headlines with this rich-people non-issue.

Could we all be better occupied discussing something more significant? Of course. But with the pandemic continuing, and so many worrying “internal issues of India” to deal with, it is so restful to give one’s brain a gossipy little break by discussing all the tea the Windsors have been spilling.

It is just so low-key hilarious that they have got their collective knickers in a twist because their pristinely white royal house has been “tainted” with a bit of lowly brown. Do they not realise they are the biggest brown cliché that can ever be?