Time for a pup talk

Did you know Donald Trump was the first POTUS in 120 years to not own a dog? And when this was pointed out to him, he said he was “too busy to own a dog”, and “how would I look walking a dog on the White House lawn?” and that getting one now just to “pander to the public” would be “phony”.

Donald dislikes dogs. And the feeling appears to be mutual. In her memoir, Raising Trump, his ex-wife Ivana says that her dog Chappie barked and growled every time the future president tried to approach him.

Today, large swathes of the American public are looking forward to the arrival of Major and Champ (Joe Biden’s dogs) into the White House with greater joy than they are hailing the arrival of Joe Biden himself. They seem to think that a person who does not love dogs is a person who is not to be trusted, and I, for one, cannot help wondering if they have a point.

Nehru loved his golden retrievers. Rabindranath Tagore was very fond of Lalu, his stray dog. Ambedkar cried “like a bereaved mother” at the death of his doggo. Rahul Gandhi has a bright-eyed little dog called Pidi, who has often been called more intelligent than his master. The recent wildly popular web series Pataal Lok made the point that people who are kind to stray dogs are good people, even if they may also be hitmen and murderers. It is a documented fact that pictures of young men holding a puppy get many more right swipes on Tinder than pictures of young men holding a protein shake or a baby, though less than pictures of a young man holding the keys to an expensive car. 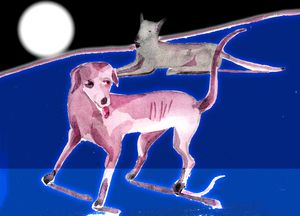 The logic seems to be that just as dogs can sniff out drugs and other illicit substances, they can sniff out duplicity, cruelty and assholery in human beings, and so basically, “dog-approved” is a verification everybody should strive for.

Okay, time for me to confess that I am harping on about dogs today because I am anxious to get the three stray girl puppies I am fostering adopted into good homes.

This litter of three girls used to be a litter of six. I had a flurry of inquiries and a choice of many candidates to take home the boy pups, but once all three of them were gone, inquiries have abruptly and very definitely dried up. Nobody wants a girl pup, even though the neutering surgery costs only Rs4,000 in a good clinic, and even though the girls are as intelligent and as alert as, if not more than, the boys. It is such a depressing glimpse into the vice-like grip patriarchy has on our country, limited not just to uneducated or rural folk, but flourishing among the educated middle classes, and the super-privileged as well.

And so, I feel Modiji should strike a blow for the Beti Bachao, Beti Padhao campaign and come forward to adopt my Rani, Kali or Cola himself. They are all fully local and very vocal, so they can be the mascots of his Vocal for Local campaign, too. Besides, the “dog-approved” verification (so much cooler than the Obama-approved validation everybody is currently clamouring for) will give him a lot of added political clout. The fact that he picked them over all the glamorous Siberian huskies and German shepherds he could adopt will underline the fact that desi design and desi engineering are best suited to desi terrain.

Modiji, do think about it. A lovely girl doggo to liven up your lonely, fakir-ish home. A warm welcome when you return to 7, Lok Kalyan Marg after a hard day’s work. The thrill of knowing you are loved, unconditionally and always, just for the person you are!

And, if Modiji cannot come through, folks, you please do? Write to me @theweeklive, and take home a gorgeous desi girl.