Carnation Milk is the best in the land,

Here I stand with a can in my hand,

Just punch a hole in the sunnovabitch!

This slogan for Carnation Milk, dating back to the early 1900s, is a classic example of first-wave advertising. In a simple, folksy style, it promises only nourishment and rest—needs which sit at the very base of Abraham Maslow’s hierarchically stacked pyramid of needs.

In the early 1900s, that was enough to get the job done. But today, we live in far more complicated times. Products in our overcrowded marketplace can no longer appeal to just the brain or just the stomach of their targeted consumer; they must vie for a share of the heart or even of the soul. Cos, that is where the feels and the goosebumps are. And, where the feels and the goosebumps are, Nike and Apple and Dove will tell you, is where the big money is. 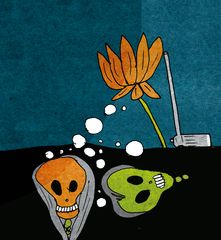 So, milk advertising can no longer be just about having no cow t*ts to pull. It can no longer even just croon “doodh doodh doodh doodh, doodh hai wonderful, pee sakte hain roz glassful,” like the immensely popular Operation Flood ad did in the nineties. It must reach higher.

Amul met with this challenge by dialing up patriotism and the need to succeed. They showcased folks from different regions and religions of India all knocking back their glassfuls of milk in their own inimitable style and forging ahead purposefully to create a united India powered by Amul Milk, to a kickass jingle that went, “Aagey badhta hai India, Amul Doodh peeta hai India”.

Last year Surf Excel showed a young Hindu girl shielding her younger Muslim friend from getting splattered by Holi balloons, so he could reach the mosque in clean clothes to say his namaz. The ad concluded that if getting dirty helps others, then Dirt is Good. A commendable, higher-ground, inclusive message nobody can object to, surely.

But India has now become a country that objects to absolutely everything. This style of higher-ground advertising has now been condemned as “creative terrorism” by millions of right-wing trolls and Kangana Ranaut. And, Tanishq has had its knuckles sharply slapped for daring to show a Muslim family being nice to their Hindu daughter-in-law, and gifting her with a Tanishq gold set during her Godh Bharai ceremony.

Aukaat mein raho, the ad frat has sternly been told. Stick to your brief. Stay in your little idiot box. Talk about dirt removal and thirst-quenching, and cut and carat. No more lectures in acceptance, forgiveness and loving-kindness, and challenging of narrow thinking by detergents and dairy products and jewellers, please. No more thought-leadership, basically. No more battle for the heart of India. The heart of India must belong only to Ram, nobody else.

Where earlier, we were somehow investing in the exciting idea of a sparkling, progressive, large-hearted and pluralistic India, we are now just buying a gold necklace.

Our rulers are mandating advertising sans the feels and the goosebumps.

Heck, they are mandating life without the feels and the goosebumps.

Are we really gonna let them sell us that?