A lesson soaked with sweat

We are all snobs, at the end of the day. If we pride ourselves on being entirely unaffected by caste, wealth or religion, chances are that we may sneer at bad pronunciation. If we mingle freely and without judgment with people of all faiths and origin, and we are chill with bad grammar or intellectual ignorance, then perhaps we are the sort who look with pitying non-comprehension at people who are overweight or unfit.

Of course, the things you love, and the things you do, do not define the individual you are. They fuel great college rivalries, good-natured competition and sparkling party conversation. Snobbery can be constructive and aspirational. But when it tips over into wilful misunderstanding, prejudice and bigotry, then we have a problem.

A couple of years ago, I was at a party where a young stylist, known for her work in various Bollywood productions happened to say to me, “Oh, you work out at a public gym? Oh, but you are from Bangalore, na! So lucky! I would love to join a Gold’s Gym or a Fitness First or whatever, because I hate working out alone. But bro, here in Bombay, I just cannot. There is,” she gave a delicate little shudder, “TV actor sweat all over the machines and it just makes me want to throw up.”

I came back with something weak like, “Wow, that is pretty bitchy, even for a fashion designer!”(a remark that reveals a lot of my prejudices), and we both laughed and sipped our wine and moved on to talking about something else. But when the news of Sushant Singh Rajput’s death came out, this cruel little exchange came back to haunt me.

It is stupid to look down at TV talent, because TV has given us not just Shah Rukh Khan, Ayushmann Khurrana (Roadies) and Arijit Singh (Fame Gurukul), but also Smriti Irani, the giant slayer of Amethi, who took down a fourth-generation political superstar from his home bastion. TV discoveries (of both genders) are just as goodlooking, charming and hot as the ones on the big screen, and not one-tenth as pampered and fussy besides. 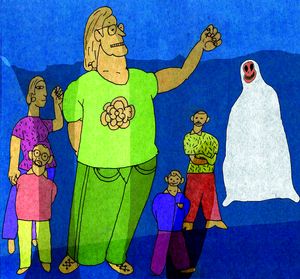 It is stupid to look down at TV talent when my 72-year-old housekeeper, whenever she is asked which movie she would like to see, invariably answers “Maanav ki picture dekhni hai (I want to see Maanav’s movie), which, of course, is Sushant’s character’s name in Pavitra Rishta—the show that made him wildly popular all across north India for six whole years. And, that is why all the big Bollywood stars, in spite of all their snobbery, show up meekly at Kapil Sharma’s Comedy Nights with Kapil when they have a film to promote.

Probably the stylist I met had memories of costumes being returned to her after an over-extended, eighteen-hour, non-AC shift, damp and heavy with hardworking sweat? Of course, that would never happen on a shoot with a top star, for whom four copies of the same costume would have been stitched, so he could remain daisy-fresh right through his contract-mandated, fully air-conditioned, eight-hour shift.

The crux of Bong Joon-ho’s Oscar-winning film, Parasite, is the smell of rancid sweat. It is what sets the rich people apart from the poor folk, and it is the rich man’s fastidious, involuntary, almost imperceptible wince at the whiff of the poor man’s sweat that tips the poor man over into stabbing the rich man to death in the climax.

Nowadays, of course, Covid-19 has made everybody’s sweat a big no-no, Amitabh Bachchan downwards. It has proved that blockbuster sweat, at the end of the day, is just the same as TV actor sweat. And that both can be equally tainted, or equally talented.

Perhaps that is a little lesson all of us snobs should sit back and absorb.