Agrima’s video, posted in 2019, is quite amusing, and anybody with even a modicum of intelligence and impartiality will grasp that she is not poking fun at Shivaji, but at the self-styled Shivaji bhakts on Quora. Anyway, such are the political and social realities on the ground today, that once her video caught the eye and the ire of the moral police, she took it down at once, and issued an unconditional apology.

But this was not enough to appease Shubham, who released a video describing graphically how he would rape Agrima, in language so violent and hate-filled that it has given me nightmares. Shubham has over three lakh followers on Instagram, and the video has over 25.4 K likes. Which means that over 25,000 people watched this man describing how he would violate this young woman anally with his c**k, which would ram through her body like a snake till it emerged from her mouth and shut her up forever, and when they had finished watching, they pressed the red little heart that on Instagram connotes ‘like.’ Essentially, they all said, ya Shubham, go for it, we’re with you, hum tumhare saath hain.

Thankfully, the real police stepped in and arrested the moral policer, who deleted his post, and put up a more cowed video, muttering that he never said anything about raping anyone, and how he respects women. This filthy piece of doublespeak, in which he continues to heap subdued hate on Agrima, has more than five lakh likes on YouTube already. 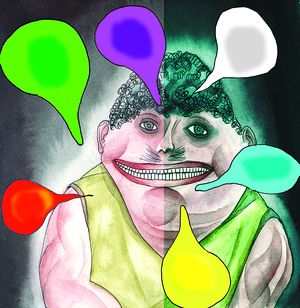 I’ve no idea why people like Shubham zero in on people like Agrima—is it because she is attractive, and English speaking and earns a decent living, because she is on a stage with lipstick on, airing her political opinions, and not behind a kitchen counter swathed in a ghoonghat, silently rolling out theplas? Are they doing it to be popular? Or powerful? Do they really revere Shivaji so much?  I am not clear, but the one thing that stands out quite clearly when you go through his feed is the desperate need to project forcefulness. This person thinks people respect that kind of macho, dominating figure, that adopting that persona is gonna make his life bloom with bright-red little hearts all the way.

Another incident of brute force unfolded horribly in Tamil Nadu recently. Father and son duo Jayaraj and Bennix were arrested by the police and beaten so savagely for an entire weekend for the crime of keeping their mobile spare parts shop open 15 minutes past the curfew deadline, that they died in lock-up. Their family were then ordered to take the bodies home, and instructed to bring ‘dark lungis’ with them­—to hide the multiple fractures and the rectal bleeding the abuse had caused.

Donald Trump summed up this thinking well when he told his governors how they should handle the #BLM protestors: ‘You must dominate. You’re gonna have to dominate, or you’re gonna look like a bunch of jerks.’

In a world growing increasingly chaotic, with all systems compromised and all institutions crumbling, sometimes, people who project a superficial, toxic kind of toughness can appear to have all the answers. But here is the thing.