Because India is a country of many languages, because illiteracy is so rampant and connectivity such a challenge, it is very, very hard for an idea or a person to become truly, legitimately, grassroots-level famous here. For an individual, nationwide fame happens only if they do something radical, like win the nation its independence from the British, or win India its first cricket World Cup, or its first Nobel prize, or its first Miss Universe title or an Olympic medal or become the first world famous porn star of Indian descent. Similarly, an idea can only grab the nation’s imagination if it is strong, simple, goosebumpy and if insane amounts of money is pumped into making sure the entire country gets to hear of it.

The good part is that once a person or idea achieves this level of fame and acceptance, it is very, very hard for them/it to be dislodged from the nation’s consciousness. They become as rock-solid as Rajnikanth. Or, as the notion that nighties are acceptable out-of-home attire if teamed with a dupatta. Or, as the concept of unity-in-diversity—a blast from the past that we thought was dead but which now seems to be making a comeback as strong as a Rocky sequel. 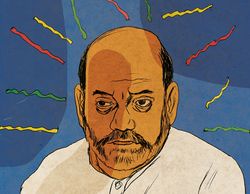 The shortcut to achieving this level of fame instantly is to piggyback onto the people or ideas who/that have already established themselves at this mega level. If it is a person, you could kill or marry them or shamelessly appropriate their legacy (Nathuram Godse, Mira Rajput and the Sardar Patel statue are all good examples). If it is an idea, you can somehow pervert it, subvert it or give it a major spin and thus grab the nation’s eyeballs.

This is something that political parties, especially the BJP’s PR machinery, understand well. Again and again, they identify the strong, simple symbols and ideas closest to the nation’s heart, give them a spin and then hammer those twisted version into our national psyche with their massive media spends.

And so, concepts as ubiquitous as Lord Ram, cows, momos, Muslims, Pakistan, soldiers, 11,000 note, gas cylinders and famous universities have all been perverted and piggy-backed upon. If Modi is a chaiwala, Amit Shah is a nimbu pani waala. The man possesses the undeniable gift of taking the lemons life deals him with and turning them into lemonade. Uri turned into surgical strikes, Pulwama into Balakot, JNU into tukde-tukde gang, ‘Chowkidar Chor Hai’ turned into #MainBhiChowkidar, the crappy economy turned into Bangladeshi-immigrants-stealing-your-jobs, and right now, he is busily trying to turn the Shaheen Bagh protest into a BJP victory in Delhi.

The top hashtags on Twitter as I write this are #370inShaheenBagh and #SurgicalstrikeinShaheenbagh—rabid saffron trolls are screaming for these measures, which a government would use against a national enemy, to be employed against citizens of India indulging in peaceful, Gandhi-style satyagraha. Sinister conspiracies abound—about a den of terrorists plotting mayhem and murder, about brainwashed children marching to jihadi tunes, about a paid rate of 1700 a day and a plateful of biryani. The master himself is busily stirring the pot, trying to activate ancient fault lines, telling Delhiites that 30 per cent of them are Hindu immigrants from Pakistan, and that Shaheen Bagh is a horror that must be clamped down upon by pressing the button on the Lotus on poll day.

But what he has not factored in is that India, in its infancy, was nursed and nourished on the idea of Hindu-Muslim-Sikh-Isai. Unity-in-diversity is our soul food, our oldest and most goosebumpy idea, our dearest collective memory, the mother’s milk we were all fed. And every movie-going Indian knows that you cannot mess with that.

Coupled with the bijli, pani, education and health that Kejriwal has delivered, this mother’s milk may yet prove more delicious to Delhiites than a lemonade of hate.