My struggles with religion

Exciting times! I’m being trolled on Twitter for pointing out, on an NDTV debate, that #MainBhiChowkidaar is essentially a reaction to #ChowkidaarChorHai, and therefore a defensive position and an acknowledgement that the ‘chor’ barb hurt, and hurt hard. Now this is my personal opinion as an advertising professional. Anybody is free to agree or disagree with it.

I had hoped for intelligent debate on the issue, but all I got was a herd of pseudo-chowkidaars stampeding all over my Twitter feed, eagerly informing the world that I am Congress politician Margaret Alva’s daughter-in-law (so what?) and that I have absolutely no legit status as an advertising professional (not true, I have worked in the field for 17 years and my work in PepsiCo is very well known). They also accuse me of ‘hiding my real name’ (again, not true—my given name is Anuja Chauhan, and I am feminist enough to keep it that way.) They call me all kinds of exotic names like ‘rice-bag convert’ and ‘crypto-evangelist’ and ‘chudail’ and triumphantly dredge up an ancient tweet I had posted in the early, heady days of Twitter, about converting to Christianity ten years after my marriage, and stating that it is a free country and if anybody wants to change their religion, they should be allowed to do so. 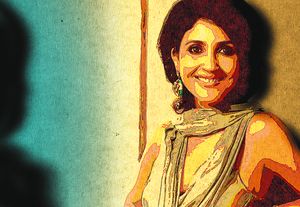 They keep trotting this tweet out periodically as proof that I am ‘hiding’ my identity. I fail to see how I am ‘hiding’ it, if it is out there on a public Twitter post for heaven’s sake, not to mention in the acknowledgements pages of every book I have written—and I have written five.

I have become, to mangle Pink Floyd, ‘Spiritually Numb’. Or post-religious, if there is such a term.

When I was a child, I had intense, unquestioning faith in ‘Bhagwaanji’, whatever that childish term meant. As I grew older, I got disenchanted with organised religion. Christianity appealed to me as a simple, clean faith; I was much struck by the idea of a man sacrificing himself to save the world, and also, I had a list of selfish boons I was hoping Jesus would grant. So I converted.

A good many years later, I realised that Christianity was as good or as bad as any other organised religion—the same claiming of a higher moral ground, the same insistence that it was the only true way and that all other ways were false, the same harping on the fact that no miracles were happening for me because my faith was not strong enough. Very traumatised and heartbroken, I realised that I was back to square one.

This time around, I did not bother to tweet my position to the world. I knew the world had enough drama going on already, thank you very much, and it did not really give two hoots about my private epiphany, which was this: I do not think anybody alive has the answer to the God question. We are all just stumbling around, making wild guesses, and extrapolating and hoping hard, really.

I have not lost all hope in a Maker, but I know that nobody has a patent on him. And that he does not dwell in brick or mortar or in purported birthplaces.

The larger point I am trying to make, I guess, is that everybody’s religion is their own personal business and nobody else’s. And that more evil has been done in the name of religion than in the name of anything else in world history. At the moment, an entire election seems to be centering, willy-nilly, upon it, and upon its ghoulish twin sibling—muscular patriotism. Please let us not let it become the reason why we pick a particular party.