Our time will come

Overheard a child in an airport bus asking his mother if we were now at war with Pakistan. Before she could even reply, pat came his next question, “Will my exams be postponed?”

From the nervous giggle he gave as he asked this question, it was pretty evident that he wouldn’t mind that happening at all.

Yes, the suspension of all routine activities during war can be called ‘exciting’—there is drama everywhere, every emotion is heightened, there are insane goose-bumpy highs and gut-wrenching lows. That is why there are so many books and movies about war—it makes for great, soul-stirring cinema.

What it doesn’t make for, however, is for great reality. 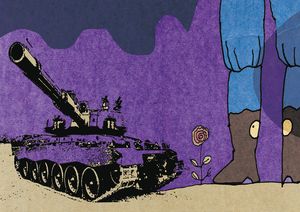 Real war is painful, cold, smelly, gruelling, messy, nerve-wracking, a drudgery. It is tragic, wasteful, sordid and grotesque. Limping back to normalcy afterwards can take decades. It is, above all, highly avoidable. As far as I know, the only people baying for the cheap thrills of war are those who have never been in one.

A mature reaction from both the government and the populace is the need of the hour, and thankfully, that seems to be what is happening. People are offering up their homes and their good offices to Kashmiri students who are facing threats of violence from jingoistic groups. Political parties are stating that they will stand united through this hour of crisis, and already, two leading Jaish-e-Mohammad terrorists have been killed in a controlled, carefully targeted encounter. Of course, obnoxious elements like the Bajrang Dal have been ordering Kashmiri students in Uttarakhand to ‘go home and not return till there is an Indian flag waving from every Kashmiri home’, and Amit Shah couldn’t resist a few cheap opportunistic cracks at the Congress. But overall, the trend seems to be more introspective and anti-war.

February-March is the season for board exams, and I can’t help thinking that this was probably the time when the young Adil Ahmad Dar decided to drop out of school. Becoming a glamorous fidayeen, claiming the moral high ground over all his tamely studious schoolmates, training with ‘macho’ weapons and plotting his revenge on the soldiers who allegedly made him rub his nose in the mud in a circle around their jeep must have seemed far more exciting than mundanely studying for his approaching class twelve board exams. But a better revenge would have been to stay in school, crib his books, clear his exams and somehow make a success of his life instead of dying in this ghastly fashion, thus becoming what the soldiers suspected him of being all along.

Sure, given the ground realities, Adil’s classmates may complete their class twelve and their graduation and still have no jobs to show for it in a few years time. But hey, at least they will still be in the running. Suicide, even a ‘spectacular’ suicide like this one, is eventually an act of terrible cowardice. Far better is to sit the papers and try and make a good life for yourself, your homeland and your neighbours.

Two popular commercial movies have been rocking in our cinemas lately. One offers a wham-bam solution to the problems the world throws at us and offers us the high-energy slogan, “How’s the josh?”

The second, whose main character just happens to be a Muslim college boy who lives in grinding poverty in a squalid slum, recommends a more measured, constructive path. Its message is about hard work, hanging in there, eschewing cheap thrills, keeping your cool and eventually finding your place under the sun. That is the slogan we must adopt. Apna time ayega.