The legend of Mumbai's 'Danny' Chandrachud

The Chief Justice of India is taking on the fuddy-duddies

Old friends of Chief Justice of India Dhananjaya Y. Chandrachud call him ‘Danny’, a nickname given to him by one of his teachers at Mumbai’s 162-year-old Cathedral School, which counts Salman Rushdie and Zulfikar Ali Bhutto as ex-students. His parents, former CJI Yashwant Chandrachud and classical singer Prabha Chandrachud, call him ‘Dhanu’. In Bambaiya lingo, he is known as ‘genius aadmi’. Those who have been following his career say in chorus with undisguised pride, “Danny is the CJI India needs now!”

The CJI’s colleagues credit Mumbai a great deal for “shaping” him as a forward-thinking liberal. Between November 9, 2022, when he took over as CJI, and December 16, as many as 6,844 cases have been wrapped up. As he stated recently, “No case is small or big enough for the court.” Applause!

At a recent high-profile wedding reception in Mumbai, which saw India’s legal eagles in attendance, the buzz was that the CJI himself would show up. I kept my eyes peeled for a sighting in the 1,000-strong crowd. I have long admired the learned judge for his bold views on contentious issues. 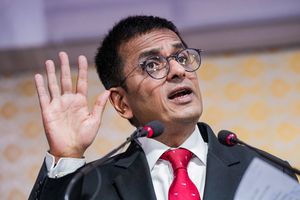 An “accidental lawyer” who loves cricket and music, Chandrachud, 63, is known for his dry wit and quiet put-downs. I love one particular anecdote: when an advocate asked for a date after January 13, the CJI joked: “Is it an auspicious date suggested by an astrologer?” The advocate confessed it was his wife’s birthday. The CJI responded, “Very valid reason….”, and a new date was promptly fixed.

Chandrachud is married to lawyer Kalpana Das (his first wife, Rashmi, tragically died of cancer in 2007). The couple has two foster daughters, and he has two sons from his first marriage.

Chandrachud’s far-reaching judgments as a Supreme Court judge have made him a legal legend. He has twice upturned his father’s judgments, which, by any standards, is a pretty gutsy thing to do given the old boy’s formidable reputation. His penchant for revisiting stagnant issues and pushing for reform has made him a public hero. Awestruck admirers refer to his various progressive rulings—like the recent ban on the medieval “two-finger test”, used to determine whether survivors of sexual assault are “habituated to sex”. In September 2018, in a historic judgment that was hailed across the world, a five-judge bench of the Supreme Court that included Chandrachud decriminalised homosexuality.

While waiting for the sprightly CJI to put in a cameo at the wedding, several senior advocates pitched in with their opinions on the man they called a “shrewd tactician, a sharp politician, a radical thinker and daring activist who has the prime minister’s ear”.

Whether or not he has NaMo on speed dial, the fact remains he has played a key role during watershed moments. Like in the Sabarimala case, where a majority of the five-judge Constitution bench declared that preventing the entry of women of menstrual age was unconstitutional. Equally transformative was the judgment that affirmed the right of women, irrespective of their marital status, to seek safe and legal abortion till 24 weeks of pregnancy.

It goes without saying that any individual bucking the system and being perceived as a man in a hurry to change the establishment will attract his share of strident critics and generate controversy. Fortunately, for the dynamic CJI, his army of admirers (count me in!) far exceeds the fuddy-duddies interested in maintaining the status quo. Going by some of the mixed comments about the CJI that wedding night, I could also sense the envy of the old guard. They were clearly resentful of a man who fearlessly goes where others are afraid to tread.