Ira Khan, 24, Aamir Khan’s daughter with his first wife, Reena Dutta, 50, shared a sweet video of a cheesecake recently. It was her first post on Instagram after her father, Aamir, 56, announced his divorce from Kiran Rao, 47.

Celeb watchers instantly deconstructed the ‘significance’ of Ira’s cheesecake video, looking for clues—how has the family reacted to this dramatic and unexpected divorce announcement from Bollywood A-list couple, who had held it together for 15 years and had a nine-year-old son from the marriage? Whether or not we accept it, people make celebrity marriages and divorces their business. Everyone has a view. This is a worldwide social phenomenon, so it is no use repeating, “It’s a personal matter between the couple.” 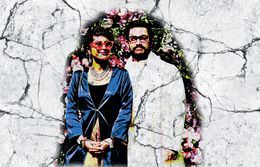 That is the downside of being public figures: every aspect of life is played out in the public arena—birth, marriage, children, affairs, break-ups, divorce and death.

Divorce announcements in Bollywood were unheard of even a decade ago. Divorces happened. But, discreetly. There was still a great deal of stigma attached to it­—a stigma that seriously impacted careers, especially of female stars. Not so today.

In the Aamir-Kiran divorce matter, both seem to be equal partners on all fronts. They co-founded Paani in 2016, to fight drought in Maharashtra. Like Bill and Melinda Gates, who insist their joint work at the foundation will continue, post-divorce, the Khans have also pledged to do the same. Melinda is a wealthy woman in her own right. Kiran’s net worth is reportedly $20million. She is a producer-director and screenwriter, who first met Aamir on the sets of Lagaan (2001), when she was assisting filmmaker Ashutosh Gowarikar, and Aamir was still married to Reena. True to their statement of staying friends and co-parenting their son, Azad, they were seen together in Ladakh earlier this week, on the sets of Aamir’s film, Laal Singh Chaddha.

Thousands of middle-class Indian couples, faced with the inevitability and trauma of divorce, seek guidance and take their cues from people like Aamir and Kiran. Divorce is deeply disturbing and emotionally shattering for most couples. In our society, access to counsellors is expensive and challenging. Most conservative families abhor the idea of divorce and urge warring couples to stay miserably together, rather than give themselves a second chance. A lot of film industry marriages are a sham that fools nobody. But for the watching world, it is viewed as a ‘stable’ marriage and the couples feature in glossy ‘happily ever after’ stories, which shower high praise on them.

As a close family friend of Aamir and Kiran told me, “Every word of their statement is true. I can personally vouch that they are unimaginably genuine and sensitive human beings. Aamir once stated, ‘But Kiran and I never lie.’ How many of us can say that even to ourselves?” To that affirmation of loyalty, I can only add I have known both of them myself, but not this closely. Kiran, in particular, has come across as a ‘regular’ person—a far cry from other star wives with their airs and conceits. Which is why I was disappointed while watching their video about the divorce—Kiran did not open her mouth even once! She smiled and nodded blandly through Aamir’s short address, like she was a flowerpot or a ventriloquist’s dummy.

The pandemic has taken a huge toll on urban marriages, with divorce cases spiralling and instances of domestic violence going up exponentially. A lot of troubled couples will no doubt seek inspiration from the way Aamir and Kiran are handling this, the most difficult time in their lives. Let us wish them the best.