Ravi Shastri is a super combination of flamboyance and determination. As India’s head coach, he has had his ‘moments’—not all of them laudatory. But it is important to remember Shastri’s track record as an ace cricketer. For all that, he wears his position lightly and with appealing nonchalance. He is a guys’ guy and a ladies’ man—quite a rare feat.

Shastri turned 59, recently—and he still has fans swooning. The trolls were in overdrive, too, but then Shastri is Shastri, a jolly good sport who laughs off digs and carries on with his tough job of managing the boys.

Witty, suave and charming, his post-playing days remain as colourful as those that propelled him into the international cricket arena as an 18-year-old left arm spinner, who took six wickets during his debut Test in Wellington. To say nothing of his scoring a century while facing Imran Khan and Sarfraz Nawaz during the 1982-1983 tour of Pakistan. That is the thing about Shastri—his derring-do! Clearly the team admires their straight-talking coach and the captain (Virat Kohli) has his ear. Shastri’s experience and standing make him a key player during these stressful times, with all the dramatic changes faced by the IPL. Getting the message through is an important part of a coach’s strategy—what he says to the boys in the locker room remains there. But when Shastri is confronted with a hostile press corps, he talks tough and stands up for the team, while also providing a bit of masala for hungry scribes to feed on. 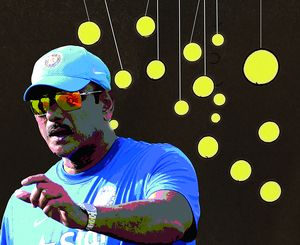 Now here is the question: How should sports stars deal with the media? Japanese tennis star Naomi Osaka has thrown up an important issue and is paying the price for it! Osaka has talked about mental health issues related to post-match stress, when it is obligatory to talk to the assembled press—win or lose. The French Open is on, and tennis stars like World No 1 Ashleigh Barty see press interactions as ‘a part of the job’. A few ranked players have slammed Osaka, reminding her that it is press coverage that keeps the fans informed and provides invaluable perspectives to players themselves. Serena Williams has offered support to “the most marketable female athlete in the world”. Frankly, with so much money riding on sports, being visible and pro-active, seems to be the only sensible way. But what if a player is getting seriously affected by press conferences? Is that person not entitled to exercise choice? Not every player has the exact same temperament and fans pay to watch great games. Yes, it is entertainment at the end of the day, with multi-million dollar deals riding on successful tournaments. But my sympathies lie with Osaka, who stormed her way into global fame, when she dethroned reining superstar, Williams, and claimed the top spot.

Are men less vulnerable to emotional pressure during matches? Do they not feel diminished after losing a match and facing a barrage of hostile questions from the media? Osaka said it is like “being kicked when you are down”.

Sachin Tendulkar has bravely admitted to dealing with depression for a decade when he could not deal with the non-stop scrutiny. It is important to empathise with what athletes face during their peak years, when expectations are sky high and miracles are demanded.

This is a good time to think about Osaka’s dilemma. What fans want to enjoy is top class tennis from an amazing player who serves at 201km per hour. If she chooses to opt out of the cruel post-match glare—so be it. Ditto for any man who may feel encouraged by Osaka’s stand and decide to speak up. Their time starts now!