A thousand Dishas will rise up

The moment I heard about Disha Ravi’s dramatic arrest, I was tempted to instantly register my outraged reaction and express unconditional support. Why? Déjà vu! She reminded me of my 22-year-old self. In our youth, have we not felt passionately about causes that matter? Cynicism and worldliness surreptiously creep in much later. But, at 22, with ideals and idealism intact, we are ready to stake everything for our beliefs―right or wrong. Today, the climate activist, accused of serious charges by the Delhi Police, has catapulted into the international arena of high-profile catalysts for change, much like Greta Thunberg before her, and several others who are likely to follow in the footsteps of these two.

I wonder if even two months ago, Disha could have imagined such a shift in her personal narrative and such a radical conversation around the prickly (unresolved so far) farmers’ issue, brought on largely by her arrest. Her youth (gender, too) is neither an alibi nor an excuse. At 22, she is not a giddy-headed little girl, who can be effortlessly swayed or brainwashed. Individuals younger than Disha have played significant sociopolitical roles throughout history. Age is no defence when it comes to sensitive issues expressed in the public domain. Nor is immaturity or ignorance. I am not here to plead her case, or explain the consequences of the ‘toolkit’ controversy. She has her family, friends and lawyers to perform that role.

The response to the #fingeronyourlips movement makes it clear that the arrest has generated an avalanche of support for her, not just in Bengaluru, Delhi and Mumbai, but across continents. People are questioning the definition of “anti-nationalistic thoughts”―which is what she stands accused of. Being environmentally conscious cannot be deemed a crime or described as being anti-nationalistic. But, perhaps, the agencies know something far more incriminating about Disha, than the rest of us, who are merely going by her work in this space that is easily available. 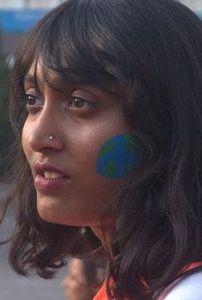 Disha is being carelessly called ‘Bengaluru’s Greta’. Come on, guys. Be a little original. Why look westwards for role models? We have enough climate change activists right here in India. Why not ask them a few pointed questions about Disha’s initiative? We are not the experts―they are!

Till such time as we know what happens to Disha going forward, I can only go back to my own college years, when, absurdly enough, we were staging sits-ins, burning American flags and chanting slogans to protest the Vietnam War. It was not ‘our’ war―but our hearts were in the right place. We were raising our voices against oppression and injustice, and letting the authorities know that ‘Make Love, Not War’, was the only way to save the world. And yes, we also painted the internationally recognised peace symbol on our faces, exactly like Disha has done fifty years later. This is what being young is all about! It is the one glorious period of our lives when we are unafraid and romantic enough to believe we can change the world. It is a precious prerogative that must not be brutally snatched away by the state.

The administration has inadvertently created a folk hero out of Disha by going after her so blatantly. They have alienated a huge segment of their vote bank! Not the smartest move, guys. Do not trample on the dreams of those who disagree with your politics. You may use your clout to silence them for now, but for every Disha you arrest, a thousand more Dishas will rise up. What will be your solution then? Let me guess―build more jails! Right?