Confession: I had mixed feelings about Aravind Adiga’s Man Booker prize winner, The White Tiger (2008), when I read it back then. Those feelings were carried forward during the first few minutes of watching its Netflix adaptation. Not another movie about a western filmmaker’s idea of India, please! The opening sequence packaged every conceivable desi cliché―images of garishly painted Hindu gods and goddesses, poverty-stricken pavement dwellers huddling and shivering in the harsh Delhi cold, overcrowded bazaars, grime and filth, a clumsy voiceover and a crazy, drunken car ride. I was about to turn away in sheer annoyance when my attention refocused on an unknown (to me) actor―Adarsh Gourav, the ‘servant’ in the film.

One look into his incredibly expressive, luminous and intelligent eyes, and I was hooked. Gourav, playing the low-caste Balram Halwai, a villager from dusty Laxmangarh who becomes a driver to the wealthy, venal Sharmas, delivers a performance that knocks the socks off unwary viewers like me. It is a case of inspired, brilliant casting, and Gourav, who has received rave reviews in the international press, could well be a worthy successor to Irrfan Khan, the most successful international actor from India.

Gourav is a Jamshedpur boy, so is the leading lady and one of the producers of the film, Priyanka Chopra Jonas. While hers is a negligible role, it is Gourav who eats up the screen in every scene. Considering he is pitted against seasoned actors like Rajkummar Rao and Mahesh Manjrekar, it is no small feat. In his interviews, Gourav says he prepped for the role by working 12 hours a day as a plate cleaner at a food stall. It was this experience that made him acutely aware of how millions of Indians are ‘invisible’―we simply do not ‘see’ those who are poor, shabbily dressed and not famous. Gourav stayed ‘in character’ by dressing and behaving like Balram for three months, managing to fool a man who offered him 020 for lifting iron rods from his vehicle. 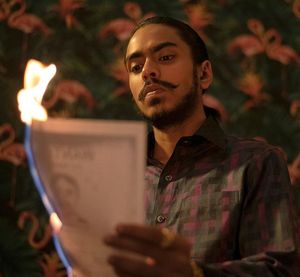 Ramin Bahrani, who wrote, directed and co-produced The White Tiger, was Adiga’s college mate. By picking Gourav and extracting such a terrific performance out of the 26-year-old, the award-winning American director of Iranian origin has impressed audiences worldwide. Yes, there will be comparisons to Danny Boyle’s Slumdog Millionaire and Bong Joon-ho’s Parasite, given that all three films focus on ugly class divides, prejudice, inequality, rage and revenge.

The White Tiger features predictable bum shots of people defecating in the open, and the casual brutality of maaliks hitting servants and, in this case, framing the driver for a crime committed by his employer. It is when the worm turns and servitude is replaced by fury that the film engages viewers more fully. A lesser actor would have messed up the transition, but Gourav handles it deftly.

If many of us squirmed while watching the scenes of the driver’s humiliation, it is because they are so familiar. Today’s generation refers to servants as house help or staff. But has anything really changed? Gourav plays his masters shrewdly, piling on the compliments, flattering them shamelessly, and smiling through the abuses hurled at him. We know he will emerge triumphant in the end, but because of a trite resolution, the ‘New India Rising’ message remains hollow and phony as a finale to an otherwise riveting watch. The ‘invisibility’ of our masses is the film’s far bigger takeaway.

In Gourav, we may have found a talent capable of going well beyond the limitation of his scripted dialogues. He describes himself as “mostly an actor, occasionally a crow”. Intrigued? Watch him play Balram Halwai and figure which avatar appeals more to you. I am rooting for both―the actor and the crow.