We are told Joe Biden has gone into a huddle with key advisers, as he waits for President Donald Trump to move over and take his butt out of the White House. Even as world leaders rush to congratulate Biden on his recent victory, Donald is still trying hard to delegitimise his rival’s win by tweeting, “He won because the election was rigged.” Yeah, right! Well, we will still have orange hair to contend with till January. We badly need a global jester to amuse us in these grim times.

I recall our brief encounter in Pune, in 2014, with much amusement. Donald was not the president of the US at the time, but had informally announced his decision to throw his hat into the ring. He was in Pune to attend a big ticket promotional event for Trump Towers, his premiere entry into the luxury living space in India. Partnering Donald in this glamorised venture was local builders Panchshil Realty, promoted by Atul and Sagar Chordia, close associates of NCP strongman Sharad Pawar. Tout-Pune was agog at the thought of meeting Donald over a tightly structured evening. I was both curious and amused at the prospect of being in the same ballroom with one of the most unusual public figures on earth. I was not disappointed! Up there, on stage, with the gorgeous Lara Dutta as his interviewer, Donald effortlessly took over the show and dominated the conversation, as only he can. Lara had done her homework meticulously, and asked all the right questions, especially with regard to his business ventures in India and vision for the future. 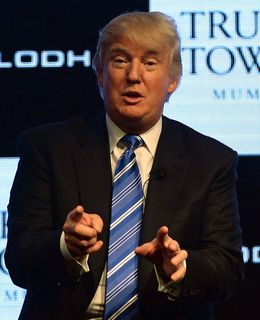 Trump at an event in Mumbai during his 2014 visit | AFP

Larger than life? Tick. Garrulous? Tick. Super energetic? Tick. The man with seemingly tireless energy had flown into Pune for a few short hours, and was scheduled to jet off straight after the event. His sense of timing was as precise as his crazy sense of humour. I recall him tugging at his trademark orange thatch of hair to prove it was not a wig! The audience clapped and cheered as he came up with one bon mot after another, while a poised and charming Lara floored everyone with her equanimity.

We were escorted to an anteroom by the hosts, for a quick introduction, handshake and photo op. The security around Donald was tight and thorough, as expected, but my daughters and I managed a few moments of face time with the individual who would soon become the ‘most powerful man on earth’. Hurrah! He made eye contact, engaged in brief social chatter, posed for pictures and was promptly hustled away by burly men in black suits talking to their cufflinks. The person I really felt for was Donald’s son (Donald Jr), who was accompanying his father and spoke after him. Imagine his predicament! Half the fancy crowd present in the ballroom had rudely left as soon as Donald got off the stage. But for me, it was the younger Trump who came as the real surprise package—bright, friendly, unpretentious and straightforward, as compared with his pompous, bombastic dad!

Come January 2021, there will be an inglorious exit from the White House. Meanwhile, I am waiting for Barack Obama’s A Promised Land, which is likely to be the hottest book of the year, even if there are a few desi politicians in India who are squirming at his sharp observations and pointed digs. Why do I get the feeling Donald, with his towering ego, will be back in Pune soon? There are still a few apartments left to flog in his super swish development—that’s why!