Kapil Dev and I share a common zodiac sign (Capricorn) and our birthdays are a day apart. Many moons ago, he invited my husband and myself to a lavish birthday celebration in a grand suite at Mumbai’s iconic The Taj Mahal Palace. It was a rowdy, lively party with Kapil in full flow. Unfortunately, we had to leave early and missed the rowdiest part! It was at the time when the Haryana Hurricane had conquered the world of cricket and was being hailed as the Indian Cricketer of the century, “one of the greatest all-rounders’’ and more. I remember thinking how totally natural and down to earth he had remained, exuding an unapologetically rustic charm, and telling me to overlook his shaky angrezi accent and vocabulary—not that it mattered!

Kapil’s flair and confidence at the crease—who can even compare? I am not a cricket aficionado, but even I was awestruck going through his records and accomplishments as a legendary cricketer, who had pipped Sunil Gavaskar and Sachin Tendulkar to walk away with the Wisden title of the greatest Indian cricketer of the century in 2002. He described the win as his ‘finest hour’. 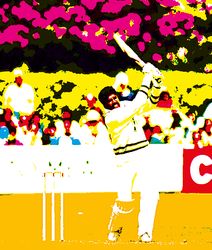 All these glorious moments will soon be available to Kapil’s fans across the world in Kabir Khan’s much awaited movie, 83, starring Ranveer Singh as Kapil, with ‘83’ marking the year of India’s historic World Cup win, which had him captaining the team.

Despite all the honours (Padma Bhushan included), the essential Kapil Dev is still the lad from Chandigarh, born to a timber merchant father and a homemaker mother, as one of seven children. He once confessed he regretted not having paid more attention to education as a young boy, which may well be the motivation for Kapil starting a foundation (Khushii) along with Romi, his wife of 40 years, to educate underprivileged kids. At the time I used to meet them occasionally, either in Mumbai or in Delhi, I had noticed how effortlessly they would become the centre of attention, even at large gatherings with wall-to-wall celebrities present. At one such glittering party in Mumbai, which saw the biggest Bollywood stars in attendance, it was Kapil Dev’s arrival that caused the most excitement. Later the same evening, I caught up with him in a more secluded area, and was delighted to see him choosing to spend precious time with the waiting staff of the fancy restaurant—sportingly posing for pictures, signing autographs, sharing anecdotes—while other celebrity guests preferred to schmooze with one another. Refreshingly, Kapil had walked in alone, minus body guards or an entourage. I cannot imagine the current crop of cricket heroes doing that.

Ranveer Singh is as approachable as the toothy cricketer he is playing on screen. Like Kapil, Ranveer is a live wire, who never snubs admirers begging for selfies. Ranveer can effortlessly carry that legacy forward. Both men are robustly in touch with ground realities, while aiming for excellence in their chosen fields. Kapil is known to be an ace and astute businessman. Ditto for Ranveer. Kapil has authored four books, including one on Sikhism. We are waiting for Ranveer to follow suit with a no-holds-barred biography. As a family, the Devs project a wholesome togetherness, which is adored by fans. No wonder, the 61-year-old Kapil’s recent health hiccup (angioplasty) generated deep and genuine concern across the world.

To be admired and worshipped as a sportsman is one thing—but to be loved and adored as a human being is a true blessing. As his loyal fans have consistently maintained, Kapil da jawab nahi.