An Oscar is the kiss of death in Bollywood,” tweeted the award-winning actor-producer-director Shekhar Kapur to one of the most talented musicians alive, A.R. Rahman, who responded somewhat laconically. This exchange highlighted the increasing polarisation in Bollywood, as actor Sushant Singh Rajput’s tragic death continues to raise important issues of nasty behaviour and blatant discrimination in India’s billion-dollar film industry.

Kapur comes with impeccable credentials as a filmmaker—he has deftly directed great actors, from Cate Blanchett (Elizabeth, 1998) and Heath Ledger (The Four Feathers, 2002), to Seema Biswas (Bandit Queen, 1994) and Sridevi (Mr India, 1987). He was keen on directing Rajput in the much-delayed Paani. The two had reportedly spent four months discussing and prepping for the project that did not get off the ground. He has gone on record to claim he knew people who had “wronged” the 34-year-old actor: “What happened to you was their karma. Not yours,” read his cryptic tweet, after the tragedy.

Regardless of how this saga pans out, it is great to know that the 74-year-old Kapur continues to be combative—as he can well afford to be. With a net worth estimated at $25 million, he is in an enviable position to say and do as he please. He is also one of the few people in Bollywood to take a stand when required, as he famously did when a “trilogy” of his superhit directorial venture, Mr India, was grandly announced without informing him. He asked an important and very valid question: “Where is the director’s ownership on material he has created?” This did not go down well with the community, with people like Javed Akhtar questioning his stand.

Given Kapur’s education and background (CA from London), he is entirely at home in an international arena, unlike some of his Bollywood counterparts. Yes, he is fastidious and picky when it comes to projects—because he can afford to be just that. Why compromise with one’s vision, particularly if the same vision has paid rich dividends in the past? 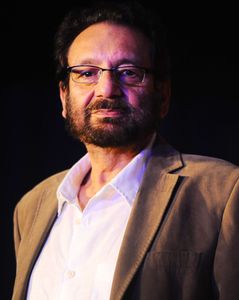 The last time I met Kapur was a few months ago at a mutual friend’s dinner. As always, I found the genial Kapur at his relaxed best, happy to talk shop. But equally happy not to. Among other invitees, there was author Amitav Ghosh with his wife, since the dinner was in his honour after a book launch. It was a small group with most guests having long associations. The exquisite Hyderabadi banquet was the uncontested star of the night, as the host and hostess (filmmaker Zafar Hai and his lovely wife Colleen) graciously looked after guests. Kapur, who was born in Lahore, was in full flow, but quietly so—there was zero attempt to hog the spotlight or dominate the discourse. He and I were meeting after a gap of several years, but it hardly mattered. The connect was immediate and cordial. It was yet another marvellous soiree that underlined a dying Mumbai tradition, and reminded all of us of an earlier era where evenings such as this one were enjoyed by like-minded people, learning from one another and celebrating each other’s success in an open, generous way.

One hears Kapur will be giving his statement in writing to the Mumbai police regarding his association with Rajput. So far, more than 40 individuals have been summoned by the cops. I am not sure for what exactly! Are the police as starstruck as the rest of the country? Or, do they want to demonstrate their efficiency in “cracking” this tricky case by getting statements from stars like Kangana Ranaut? Let us see what is unearthed. But our man Kapur has declared he will dedicate Paani to the memory of the actor who did not live long enough to star in what promises to be Kapur’s magnum opus.