The Boy from Bihar….

When people say Bollywood is a cruel place, I reply, “Yes, it is! The beast we call ‘Showbiz’, spares no one”. This hungry beast took one more victim last week, when 34-year-old Sushant Singh Rajput took his own life in Mumbai. I had once met him briefly at an awards function a few years ago. He was there as the boyfriend of one of the ladies, who was being felicitated as a ‘Woman Achiever’. He arrived late, kept his head down throughout, and left early. I remember thinking to myself that this young man lacked hustling skills and was not at all socially adept. Or else, he would have worked the room full of influential producers and directors, and sweet-talked a few. But this young man was made of some other stuff. He had a sense of self and a sense of pride—the very attributes that may have contributed to the tragedy that left the nation shocked.

Forget Gangs of Wasseypur and think ‘Gangs of Bollywood’. The deeply incestuous world of movie-making in Mumbai works in such insidious ways that young actors hoping to make it big on the basis of their talent alone are given a harsh reality check by the Big Boys, who run the show on their own terms. Unless these ‘outsiders’ agree to play ball and kowtow to their rules. Sushant may have been a bit too intense, too cerebral and too sensitive for this lot. His amazing trajectory in films speaks for itself. The directors who worked with him have mentioned the rigour he invested in each role during his seven short but impactful years in Bollywood. I have watched five of his 10 films, so I can say this confidently: as a nuanced and polished actor, Sushant was streets ahead of most of the current lot of propped up ‘stars’ favoured by the Big Boys. I watched M.S. Dhoni: The Untold Story twice within the span of a week, just to catch what I may have missed the first time. And to think that Sushant spent months training with Kiran More to perfect Dhoni’s famous ‘helicopter shot’ and get the cricket captain’s body language right. That is called admirable dedication to ones craft. 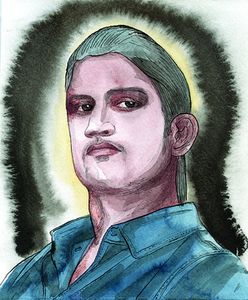 Yes, all this was noted by Sushant’s growing legion of fans. It was also noted by the Big Boys who had shoved him out of major productions earlier. Undeterred, Sushant gave two hit movies made on comparatively smaller budgets (Kedarnath and Chhichhore), even as his personal life may have been coming apart. There was a great deal of chatter around the social ostracism he was being subjected to by this same lobby. It was said that he was not invited to major Bollywood parties and was snubbed by prominent filmmakers.

The Boy from Bihar preferred to gaze at real stars through his prized possession—a Meade LX600 telescope with a spectrometer that ‘gave a feel of a time machine’. The Boy from Bihar, who wanted to be an astronaut, had won the National Olympiad in Physics, and remained an astronomy buff till the end. One can safely say, Sushant was not the average Bollywood actor, even though he did have that six-pack and could out-dance any of his contemporaries.

Something slipped somewhere. And even though he was under treatment for clinical depression for the past few months, when the end came, his emotional reserve was not sufficient to save him. The issue of mental health is the elephant in the room which very few people are ready to confront. The lockdown has taken its toll on countless individuals. Going forward, the feeling of being trapped, alone and without support will claim more victims. Let Sushant Singh Rajput’s untimely death serve as a wake up call to all of us struggling with mental demons, big and small. It takes nothing to reach out and respond to a cry for help—you could save someone’s life.