Superstar of the season

Sweet irony. Till about a month ago, Sonu Sood was one more Bollywood hunk—all muscles and decent acting chops—that’s it. Today, he is a folk hero, after he nimbly jumped into the pandemic panic, and emerged as a Covid-superstar. His first act of kindness was to arrange 60 buses at his own expense, to send back 350 migrants to their home state, Karnataka. Apart from transport, he ensured they had sufficient food and water for the journey.

He was present to see them off, and of course, the press was briefed. In an interview after his good deed was acknowledged and publicised across social media platforms, Sood spoke with sincerity and sobriety, saying he did it as he was moved by the plight of migrants. Suddenly, Sood’s popularity zoomed into stratosphere and at one point, he even managed to beat the unbeatable Salman Khan in the social media stakes! He followed up the bus initiative by another dazzling act—he chartered an aircraft to ferry 150 migrant ladies from Kerala to Bhubaneshwar.

Soon, he had transformed himself from a dimpled six-footer, playing a baddie in Bollywood films, to Saviour Sood. His do-gooder fame had spread so rapidly that all sorts of helpless victims of the pandemic started to contact him directly over Twitter. Like the abandoned old mother at Mumbai’s Bandra station whose son had thrown her out of the house. And another set of 1,000 migrants who were later transported from Uttar Pradesh to Bihar. 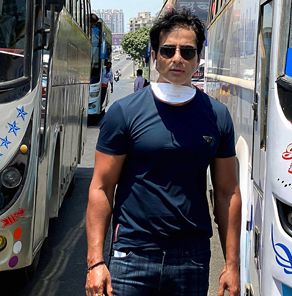 Sood’s story reads better than some of the movie scripts he has picked. He came to Mumbai with 05,500 in his pocket and shared a poky little flat with six other hopefuls looking for breaks; today the 47-year-old is a wealthy businessman, actor and producer. To that, one can safely add “philanthropist” after his Santa Claus act. He is the proud owner of high-end cars like the Porsche Panamera, the Mercedes-Benz M-Class and the Audi Q7. He owns several properties, including a lavish one in Mumbai, which was in the news for some transgressions. That news has been buried for now. And, Sonu frequently pitches in to create public awareness for several campaigns launched by the Mumbai Police and other government bodies.

Sood has acted in several multilingual films, starting his career in 1999 with a Tamil film titled, Kallazhagar. He also appeared in a Chinese film and claims friendship with the likes of Jackie Chan. Given that he had come to Mumbai to take his chances in the competitive world of modelling, Sonu made it to the top rung of the Grasim Mr. India contest before getting his movie break.

Today, he has catapulted himself into another league. It is a coveted upgrade. In fact, those who have worked with the actor say, somewhat cynically, that the Covid-19 humanitarian work has been his best investment to date. Overnight, Sonu Sood is the go-to guy for distressed folks in India.

Industry watchers also say Sonu will no longer accept supporting roles—remember, his early break in Bollywood came with him playing Abhishek Bachchan’s brother in Yuva. A producer commented cynically that henceforth Sonu will demand treble his fees and dictate the kind of role he feels he is worthy of, given his enhanced status. Sonu had already displayed an “attitude issue” when he walked out of Kangana Ranaut’s Manikarnika: The Queen of Jhansi. He was pretty outspoken at the time and his views were seen as “sexist” by critics!

Oh well, today’s version is a “new, improved” Sonu Sood. No doubt, he will be richly rewarded by the authorities. Do watch out for his name when the next Padmas are announced. Who knows, maybe he will join politics next and emerge as a people’s hero. Anything, is possible in showbiz and politics!