I met Daddy Poonawalla—Dr Cyrus Poonawalla—the billionaire chairman of the Serum Institute of India, around 20 years ago and found him charmingly eccentric, with a razor sharp mind and a nonchalance that is most disarming. His sense of humour fell into the ‘Bawaji brand’, typical of the loveable Parsis. Over time, we met here and there, mainly at Vijay Mallya’s lavish parties and occasionally at events in Pune. At the time, his handsome son Adar was a student in England. Today, the world’s eyes are focused on the 39-year-old scion, who is promising a Covid-19 vaccine by September. Adar is realistic enough to state candidly that he and his team of researchers are 75 per cent, and not 100 per cent certain of success. Adar has also stated that he will be putting many, highly profitable products on hold while concentrating on this one mission that can save millions of lives. Here is wishing them all the luck in the world.

Adar and his wife Natasha (executive director at the Serum Institute, besides being acknowledged as an international fashion icon), are friends of my children, so I have interacted with both of them from the time they got married in 2006; they first met at Mallya’s extravagant New Year’s Eve party in Goa. I have watched them evolve over time, and marvelled at the ease with which they have made their transition from a wealthy and glamorous ‘Pune Couple’ to globally recognised philanthropists and patrons of the arts. Clearly, it was the more outgoing Natasha, dressed in dazzling haute couture and perfectly groomed at all times, who grabbed eyeballs. Soon, the beautiful lady had wooed and been wooed by Bollywood stars who could not get enough of the Poonawalla hospitality and style. Their parties thrown for visiting celebrities like Sharon Stone attracted people from across the country. 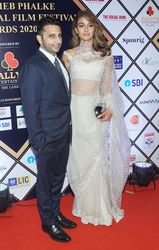 When Prince Charles and Camilla visited India in 2013, Pune featured prominently on their travel itinerary, where they were hosted by the Poonawallas. I was delighted to attend a high tea for the Duchess of Cornwall, beautifully put together by Natasha for a few ladies. The prince, meanwhile, visited the Serum Institute’s head office, and later attended the races with his wife. The royal visit, though short, offered an insight into how Adar and Natasha had evolved into India’s number one power couple. I watched Natasha with her guests at the high tea, where she played the impeccable and gracious hostess. The tea was laid out in the patio of their sprawling bungalow, and guests were courteously briefed about adhering to royal protocol. I did notice a few socialites attempting a clumsy curtsey on being introduced to Camilla when a simple namaste would have done.

A few days ago, I watched the couple take questions from filmmaker Karan Johar during the ‘I For India’ charity concert on Facebook, which raised over 03.5 crore for Give India. Natasha looked like an international movie star, with not a hair out of place despite the lockdown, while Adar was Adar, dressed in a conservative business suit, as he provided a measured response to questions about the much-awaited vaccine.

While the over-wrought world holds its breath in anticipation, one can be pretty sure this dynamic couple will be going flat out to contribute generously and work tirelessly till a viable solution is found. Once we stagger back to a semblance of normalcy, it will be great to follow the Poonawalla adventures on Instagram, a platform on which Natasha is wildly popular (more than 495K followers) and very active. We look forward to ogling at pictures of the family—Adar, Natasha and their sons Cyrus and Darius, as they jet from one amazing destination to the next, living the dream! Stay buoyant!