Bring it on, Taimur!

Never did I imagine that one day I would be devoting a column to a cute kid! But then again, never did I imagine the world would be hit by a deadly virus! So, here I am, putting my thoughts on paper and investing time deconstructing a phenomenon known as Taimur—Taimur the toddler.

Meet the wunderkind who breaks the internet each time he appears in public view. Well, one thought the gorgeous little chap would be spared the intense and intrusive fan gaze at least during a lockdown. After all, the paparazzi parked outside his Bandra home (24x7—no kidding! They work in shifts) cannot stalk the little chap during a quarantine. But guess what? Taimur’s amazing parents have recognised their son’s brand worth and the immense joy he spreads across the world, with just a wave or smile. And they have smartly turned into paparazzi themselves!

Kareena’s posts keep Taimur’s vast following on social media platforms begging for more. The last picture that captured millions of Likes and hearts, showed Taimur playing Picasso and energetically splashing paint on a wall, while his famous father channelled his inner Monet and stuck to flowers (not water lilies, mercifully). Another Instagram post had Taimur taking gardening lessons from his dad.The Taimur effect is worth dissecting. Taimur is not the only cutie in Bollywood. There are other, equally cute, star bachchas—his own cousin Inaaya Naumi Kemmu for one, or Shahid and Mira Kapur’s two. But it is Taimur who rules. Is it the blue-green eyes? The pink pout? The tousled hair with golden streaks? Who knows! 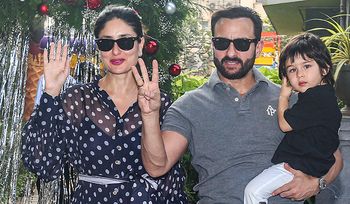 Taimur with his parents | PTI

Going by these physical attributes, Karan Johar’s twins, too, qualify. And KJo is no slacker when it comes to “positioning” family and friends. His videos of the twins dissing their famous dad also grab big numbers. But the hysteria is nowhere close to the kind Taimur unleashes. It has to do with charisma.

Clearly Taimur was born with it. I can vouch for this! I had gone over to Kareena and Saif’s home to finalise a book project. Taimur was a few weeks old at the time. His name was already known across the country, due to a silly controversy that questioned its appropriateness, given the controversial historical significance of the 14th century Turkish-Mongol ruler Taimur. The name stayed. The parents refused to budge. Soon, the boy became the most famous Taimur in contemporary history.I did not want to be too pushy to see the infant. But how could I leave without a sighting? I asked Kareena if that was possible, assuring her it was fine if the baby was not allowed visitors. Kareena charmingly obliged, and we went to the nursery only to find Taimur blissfully sleeping in his nanny’s arms. I could only spot blond hair and pink cheeks—and that was that. I left a small gift for him, blessed the newborn and checked out.

Today, when Kareena candidly states that her only rival in the Bollywood celebrity stakes is her son, Taimur, one believes her. I hear, in those distant pre-quarantine days, a single, exclusive image of Taimur would be sold by enterprising photographers at three times the price of a click featuring any adult top star! Such was his draw. And the magic has not diminished. Taimur is born under a special star. In dark and dire times like these, I chose to write about Taimur for a reason. There is such utterly depressing news out there, that until and unless a vaccine is discovered, the world is going to be stuck in a Covid-rut. We all need a few distractions to keep our spirits up. Taimur’s photographs provide that tiny happy spike. I rejoice at the excitement his presence generates on social media. Taimur’s innocent antics bring a smile to my face as I wait impatiently for Kareena’s next post. There is something addictive about genuine fandom. Bring it on, Taimur!