Chairing a jury is not an easy job. Especially if it is a jury deciding which debut author to honour with a literary prize. I love fresh, new voices. If those happen to be voices of women, that is a bonus! It was with a high level of excitement that I attacked an impressive pile of shortlisted books which had made it to the premier edition of the AutHER Awards, with 850 entries of books published between 2019 and 2020. Umm... there was hell lot of reading to complete before the deadline… but hey, the list was yummy.

I stopped when I picked up a slim volume featuring 16 short stories. The cover gave nothing away; well, till you read award-winning author Jeet Thayil’s blurb. Fortunately, I missed it and got straight into the first story. The opening line struck me, “It seems as if I have been waiting here for years.” The setting is an airport. The writer is waiting for a delayed flight to Athens. That single line sets the tone for the rest of the collection titled This Is How It Took Place. 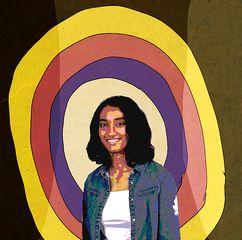 In retrospect, and knowing what I now know, the title is eerie. And, here is why: Rudrakshi Bhattacharjee was 16 when she wrote the stories. She passed away by the time the book was published; Shinie Antony, a close friend of Rudrakshi’s mother Debashree, helped get the book published. The author would have been 19 this year. In the eloquent ‘Afterword’ penned by Shinie, readers get a brief but significant glimpse into Rudrakshi’s world—a world as rich in her unusual imagination, as it was in reality. Here was a brilliant person, who at the age of 15 was offered unconditional admission at an Ivy League college (Stanford) for a creative writing workshop on the basis of her written submission. She was also a champion golfer, swimmer, a whiz at math and science. She left behind several poems, stories, a novella and many unfinished novellas. All this, Shinie tells us, were lovingly located by her mother from her daughter’s computer, diaries and scraps of paper. The same mother, Rudrakshi had once reminded: “When I write, I am a writer, not a daughter.”

Rudrakshi shared the prize with another talented debut author, Rehana Munir. Rudrakshi’s parents had flown in from Bengaluru for the special evening, and were a picture of calm and grace on stage. Debashree’s acceptance speech on behalf of Rudrakshi (the couple’s only child) was extraordinarily moving. She spoke about love and acceptance, but she also mentioned the power of “detachment”—an attribute she acquired from her daughter.

Ratnadip, Rudrakshi’s father, displayed restraint and fortitude when I spoke to him later. It was important to assure the parents that it was Rudrakshi’s prodigious talent that was being recognised with the prize—the jury was not casting a “sympathy” vote. That would have devalued all that Rudrakshi stood for.

It was essential to separate Rudrakshi’s work from her life. The writer’s imagined world is the one readers have access to and respect. Rudrakshi’s fiction displays a maturity beyond her tender years.

After a long, long time, I read a collection that made me wish I had met the writer. While reading Rudrakshi’s searing prose I felt so drawn to her personality. I was half-tempted to bombard her mother with questions. This was certainly not the occasion for such intense questioning—I let the urge pass. I went back to her book, and looked for all the meanings that I may have missed during the first reading. There were literally hundreds of lines, cushioned innocuously within paragraphs, that jumped out like rare gems in a packet of synthetic stones. It is a book to share. A gift from a writer who slipped away, leaving us begging for more.