As I began to write this column, I was doing extensive homework on one of the world’s most successful writers—Alexander McCall Smith. Discovery No.1: we share a birth year, and he is younger by a few months. We were introduced over email by Anil Dharker, the festival director of the prestigious Tata Literature Live. Anil had requested me to be ‘In Conversation’ with the author of over 80 books! I confessed I had not read even one of them. “Not even his bestseller, The No. 1 Ladies’ Detective Agency?” Anil asked in disbelief. “Not even,” I admitted sheepishly. And then I started reading his latest book, To the Land of Long Lost Friends, and was instantly hooked. From the opening chapter itself (Inside People, Outside People), I was pulled into an open air wedding taking place in a distant land. By the end of the book, I felt I knew each and every character intimately, especially Precious Ramotswe, doyenne of private investigators in Botswana, and the star of the series. 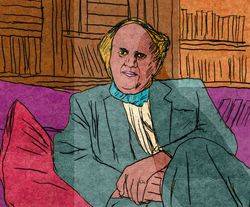 When I met Alexander (“Call me Sandy”), I felt like we were old friends—his book had done the trick! He was dressed magnificently in a Scottish kilt, and was naturally asked the most obvious question by a curious gentleman: “What do Scots wear under the kilt—if they wear anything at all?” Sandy must have answered that hundreds of times, for he had a ready reply. He clarified that he himself chooses to wear underwear. Underwear is optional for all Scots, except for those in the Scottish Regiment—nothing comes between them and their kilts! As a conversationalist, Alexander sparkles. He is a superb raconteur, and that evening he was in fine form, despite being severely jet-lagged. Elizabeth, his wife (a retired physician), is more reticent, and prefers to let her husband of 37 years, hog the limelight. Alexander was one of the stars of the Jaipur Lit Fest last year, and is certainly the big draw at Tata Literature Live this year. He seems indefatigable going by his website, which provides details of his hectic schedule, as he traipses across the world, meeting readers, giving talks and—hold your breath—still managing to write between 1,000 to 5,000 words a day! His astonishing output has placed him in the category of the world’s richest authors, with the likes of J.K. Rowling, a neighbour.

His books share a common thread. They are about ‘finding happiness’. Over a drink, he had mentioned how he visits Botswana at least twice a year, because he finds that the people there are genuinely happy with their lives. Alexander, who is involved with many charities, has the rare gift of not just seeking, but spreading happiness. Words used to describe his work are “generous writing with dry humour, gentleness and humanity”. He shuns caricaturing and there is zero condescension towards his subjects. Gender issues form a huge part of his work. Through his characters he underlines male-female binaries, in a subtle and insightful manner.

I watched him move around the room easily and without the slightest airs. Here is a person who is also a professor emeritus of medical law, with honorary doctorates from 13 universities, a musician who has written the libretto for an opera, and is the celebrated writer of the world’s longest running serial novel, 44 Scotland Street. Gosh! And here I am—exhausted just looking at this one man’s incredible accomplishments! And there is Sandy—relaxed, disarming and utterly charming, while composing his next 5,000 words for the day inside his crowded head!