Though the phrase ‘self-reliance’ does not appear anywhere in the First Five-Year Plan (1951-56), it is commonplace that the very idea of planned development, with the public sector occupying the commanding heights of the economy, implied that post-colonial India would seek to pursue self-reliant economic development. When Prime Minister Narendra Modi put forward his version of self-reliance, with a view to build an Atma Nirbhar Bharat, many thought he was saying something new. He was, in fact, enunciating a third variant of a concept that has its roots in India’s freedom struggle.

Between Jawaharlal Nehru’s version of self-reliance, as it evolved through the first three five-year plans and eventually turned into import-substituting industrialisation, and Modi’s recent articulation of it, there is an intermediate second variant that Prime Minister P.V. Narasimha Rao articulated in his famous presidential address to the Tirupati session of the All India Congress Committee in April 1992. Each variant captures the reality of a changing India in a changing world. 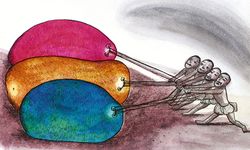 Rejecting criticism that the economic liberalisation and reform policies unveiled between June 1991 and March 1992 were a departure from Nehruvian self-reliance, Rao told the AICC that, “a country of India’s size has to be self-reliant”, but the concept of self-reliance has to evolve in step with the country’s own development and the changing global context. “While we are redefining self-reliance,” Rao assured the AICC, “we are not abandoning the basic principle.”

Enunciating his own version of atmanirbharata relevant for an India at the turn of the century Rao said, “The very level of development we have reached has made us independent of the world economy in some respects, but more dependent on it in others. This is an important aspect of the complexity of modern development.”

He then went on to define self-reliance for the world of the 1990s, how it was different from the self-reliance of the 1950s. Given the context of 1991-92, when India was dealing with a mounting internal and external debt and repayments crisis, Rao summed up, “One way of describing self-reliance would be to say that we should be indebted only to the extent we have capacity to repay.”

Rao’s address to the 1992 AICC is, without doubt, the best post-Nehruvian statement on economic policy in the past three decades. Its detailed enunciation of India’s economic priorities and policies and the spelling out of a new theory of a mixed economy and of self-reliance, relevant to a more globally integrated and self-confident India deserves wide reading even today. It is a pity that in its pusillanimous sycophancy towards Sonia Gandhi, the Congress does not make available Rao’s historic AICC address on its website. Those interested can read the full text reprinted as an appendix to my book 1991: How Narasimha Rao Made History (2016).

If Rao re-defined the Nehruvian idea of self-reliance for the 1990s, Modi has tried to do so for an India of the 2020s that would have to deal with a very different post-Covid global context. So, rather than suggest that Modi has expounded something new, merely because he has used a long Hindi word, it would be more appropriate to recognise that he, too, is re-defining an idea that has been intrinsic to India’s freedom struggle and post-Independence development.

Like Rao, Modi too has taken care not to confuse self-reliance with inward-oriented autarky. Referring to the oft-quoted concept of Vasudhaiva Kutumbakam (whole world is one family), Modi clarified, “India does not advocate self-centric arrangements when it comes to self-reliance. India’s self-reliance is ingrained in the happiness, cooperation and peace of the world.” Clearly, the appeal of some mantras endures.