While India entered the second decade of the 21st century worried about an economic slowdown and political sectarianism, China entered it celebrating not just the news of thaw in the trade war with the United States but, more strikingly, the fact that its annual per capita gross domestic product (GDP) had breached $10,000. Chinese media reported earlier this month that recently published national income data show that China’s per capita GDP was $10,276 in 2019. Technically, this qualifies China to become a member of the Paris-based Organisation for Economic Cooperation and Development (OECD)—dubbed the rich nation’s club. The OECD’s poorer economies— Mexico and Turkey—as well as countries like South Korea became members when their per capita income was below $10,000, but they are now all above that five digit mark.

The latest news from China is just one more wakeup call for Indian leadership. While the Union government is presently focused on turning the economy around in the near term, and that should be the focus of this year’s annual budget speech of Finance Minister Nirmala Sitharaman, it is time Prime Minister Narendra Modi laid out a credible medium-term roadmap for the economy that goes beyond merely asserting that India will be a $5 trillion economy. As former finance minister P. Chidambaram correctly said, India will some day be a $5 trillion economy. The question is when? 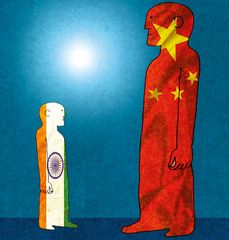 One unfortunate consequence of winding up the Planning Commission is that there is no group within the government tasked to develop an actionable medium-term growth strategy, with sectoral plans and targets. Such planning has now acquired renewed urgency given that the Union government hopes to revive economic growth by increasing public investment. There is expectation that the fiscal and revenue deficits are likely to be higher than budgeted and that the government may yet again set aside the discipline of the Fiscal Responsibility and Budget Management Act.

There is a case for fiscal liberalism this year given the low rate of national income growth and the low ‘animal spirits’ of private enterprise. However, public spending should be undertaken within a credible medium-term policy framework. While China abandoned socialist planning many moons ago and has pursued socialism with Chinese characteristics, it continues to invest in institutional capacity for medium- and long-term planning. China’s National Development and Reform Commission (NDRC) has a mandate and professional capacity that far exceeds that of India’s atrophied macro-economic planning organisation, fancily called the National Institution for Transforming India (NITI) Aayog.

The NDRC is a high-powered body that has played a key role in enabling the structural transformation of the Chinese economy from being mainly investment-driven and export-oriented to sustaining growth through a shift to domestic consumption. There is a fundamental difference between turning business and investment cycles around and enabling structural changes. A ministry of finance can, at best, deploy fiscal instruments to alter incentives for investment and consumption. The economy requires an all-in government approach for the kind of structural changes that the Indian economy now requires.

The last time India adopted such an approach was in 1991-1992. Most economists now have come around to the view that the growth process unleashed by the structural changes of the early 1990s has run its course. A paradigm shift that is now warranted cannot be addressed by the finance minister and the annual budget policy alone. The budget speech can, however, chart out a medium-term strategy for accelerating growth and generating employment.