Sachidananda Murthy on the validity of bulldozers

Governments led by Congress, other parties have also used bulldozers

During the assembly elections in Uttar Pradesh, the BJP said it had two election symbols. One was the lotus, which the party adopted at its birth. The second was the bulldozer, which was displayed at election rallies of Yogi Adityanath. The faithful would flock to decorated bulldozers, which symbolised the power of the state and of the party to punish alleged malefactors and demolish their properties.

The police and revenue officials included bulldozing in their handbook, along with encounters, and were thrilled at the voter endorsement for their zeal. The highpoint before election was the demolition of the house of Vikas Dubey, a Kanpur-based don who killed policemen, and was in turn gunned down by the police. 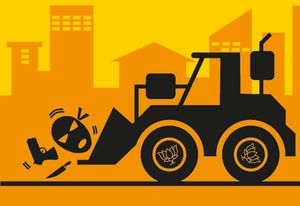 Recently, a petrol pump that belonged to a Samajwadi Party MLA was levelled for being an illegal construction. There are questions raised about how the government can demolish buildings without due procedure. But, the Yogi government that proudly cites its record, has argued that it is upto the criminal to prove ownership, and also that none of the laws that permit demolition are violated.

There are murmurs of resentment among ministers and officials in neighbouring Madhya Pradesh over the state government’s demolition drive. The most famous case happened in Indore when the local administration demolished properties of a businessman, after he had honey-trapped politicians and bureaucrats and tried to release digital evidence. He was first arrested, after which the municipal corporation deployed the wrecking ball on his properties.

Chief minister Shivraj Chouhan and his aggressive Home Minister Narottam Mishra said the state’s bulldozers must work faster than those in Uttar Pradesh, and now the Indore Municipal Corporation has struck down more properties of offenders in one go. The government has also been accused of targeting Muslims to terrorise the community, but the BJP argues it has zero tolerance towards offenders irrespective of their religion.

It is not as if bulldozer has been exclusively used by the two BJP governments. The Congress and regional party-led governments in states have also used it in the past.

The Central government does not use bulldozers. But in the last few years, the hyperactive Enforcement Directorate, which has a wide ambit to investigate money laundering activities, has issued notices for attachment of properties of businessmen and opposition politicians. In recent days, leaders of the Maharashtra Vikas Aghadi, which rules the most wealthy state, have experienced “special attachment”, including Chief Minister Uddhav Thackeray’s brother-in-law [Shridhar Patankar], Deputy Chief Minister Ajit Pawar, minister Nawab Malik and Shiva Sena spokesman Sanjay Raut. There are vows made by opposition politicians that once the wheels of power turn, same medicine will be administered to those politicians of the BJP who are riding high.

The Mughals and the British used to punish villages for offences committed by a few residents. Punitive fines were levied on people living in streets, and villages were demolished, so that nothing remains on record. Sometimes an entire population was uprooted and forced to migrate.

But, since 1947, more sophisticated methods were used to shift inconvenient settlements by seeking the land to be acquired for development projects. The Allahabad High Court and the Supreme Court have stayed the practice of the Yogi government of imposing massive fines on charges of destruction of public property and ordered refunds. But there has not been a comprehensive judgement on the legality of the bulldozer. Jurisprudence that strikes its own special fear.