Islamabad has launched a protest with Kabul

It was a quality certificate that was costly for the issuer. But, the recipient was thrilled. An unnamed Taliban official had, at a meeting in an Afghan city, described wheat donated by Pakistan as inedible, while he praised the quality of the supplies from India.

Unconfirmed media reports said that as soon as the video went viral, the official lost his job, but there was celebration in Delhi’s Krishi Bhawan, which houses the food and public distribution ministry. Commerce Minister Piyush Goyal, who the holds additional charge of food, praised “hardworking farmers”, thanks to whom India was able to supply the Afghan people with “good quality wheat”. 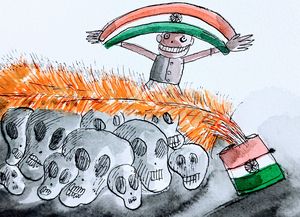 There were congratulations in the godowns of the Food Corporation of India, where workers pack the wheat into bags with the inscription of the gift in English, Pashto and Dari. A total of 2,000 trucks, in batches of 40, then transport the bags through 600km of Pakistani territory to Afghanistan’s borders. As New Delhi does not recognise the regime in Kabul, the United Nations World Food Programme handles the distribution in Afghanistan.

The external affairs ministry, too, piped in saying India always ensured quality assistance to the country’s friends. But, the Pakistan government was not amused with the comparison of its own earlier shipments with Indian supplies. Islamabad launched a protest to Kabul saying that even after agreeing to the request by the Taliban for allowing the transit of humanitarian assistance from India, the criticism by a single individual was being used by the Indian government to give a bad name to Pakistani wheat.

With India-Pakistan relations at a nadir after the changes in Jammu and Kashmir, Pakistan had agreed reluctantly to the transit request. This was vital, as India could not have transported such volumes through the Chabahar Port in Iran. India was able to send medicines and other essential donations through the aerial route via Gulf countries.

Interestingly, the FCI was criticised by the parliamentary standing committee on food and public distribution in a report last August. The committee said there were major complaints regarding diversion of food grains, rotting of cereals and corruption in the government-owned corporation, which dominates food procurement and distribution in the country.

The committee had asked the government to strictly monitor the corporation’s functioning as there were nearly 2,500 complaints from state governments in 2020—a three-fold increase from the previous year. The Union territory of Chandigarh had asked the FCI to take back wheat supplied for distribution under the prime minister’s free grains scheme because of poor quality. But, the government had argued that it had stepped up quality checks to ensure poor quality grains were not supplied.

The FCI has already sent 6,500 tonnes of wheat to Afghanistan and faces the humongous task of sending the remaining commitment of 43,500 tonnes during the summer. The wheat diplomacy may have pleased Afghan consumers, but there could be long faces in Pakistan, if there is more criticism of its wheat.