An aggressive Russia, a muted US and a watchful India

The strong words used by Russian Foreign Minister Sergei Lavrov against the United States for opposing the sale of the S-400 missile system to India have surprisingly not evoked an equally nasty reaction from Washington so far. The Indian side also was surprised at the vehemence of Lavrov’s comments made on the day Russian President Vladimir Putin met Prime Minister Narendra Modi in New Delhi in early December. A few hours before that, Lavrov and Russian Defence Minister Sergei Shoigu had met their Indian counterparts S. Jaishankar and Rajnath Singh together as well as separately.

This indicated multi-level contact, and it was only the second foreign trip by Putin in 2021, the first being to meet his adversary, American President Joe Biden, in Geneva. Indian defence and external affairs ministries have played a dead bat on the issues surrounding the missile system, including the threat of American sanctions for buying big weapons from Russia. 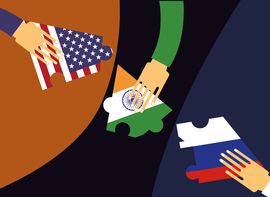 The Indian side has also been circumspect by not being willing to confirm Russian statements that some missile components have already been delivered and that the first set of deliveries will be completed by New Year’s Day. On the other hand, the Russians have been boastful not only on the missile deliveries but also on the quiet beginning of the construction of the sixth nuclear reactor at Kudankulam.

Lavrov, in his carefully prepared statements, had accused the US of trying to make India obey its orders, so that New Delhi follows the American vision for the region. This was a direct reference to India’s Quad alliance with the US, Japan and Australia. The statement also took note of the new alliance planned with Israel, the United Arab Emirates and the US, which is being nicknamed Quad West, though no summit-level meeting has taken place with the leaders of these countries. The spurt in Russia’s interest and aggression has also coincided with increased tensions between Putin and Biden over central Europe, especially Ukraine, as NATO has accused Putin of amassing an army to invade Ukraine.

India’s defence ministry has argued that it is not customary to confirm receipt of sensitive arms and that a big ceremony was organised at the Ambala Air Force Station to welcome the first Rafale aircraft from France as there was a huge political controversy at the time over the purchase. Interestingly, it was the Russian side that took the lead in announcing that the “first concrete” was poured—soon after Putin’s state visit—for the construction of the sixth 1,000MW nuclear reactor in Kudankulam. On the other hand, the Nuclear Power Corporation of India which builds the plants had not made any official announcement, yet.

The atomic energy department does not give publicity to the different stages of construction of a nuclear plant, as per its policy. But the reiteration of the nuclear energy cooperation with Russia is another reminder that the proposals to set up nuclear power plants by American companies, that were included in the India-US civil nuclear deal signed 16 years ago, are yet to be a reality. The muted American response, despite calls from a powerful senator to block the S-400 deal, may indicate the robustness of the relations New Delhi has with the Biden administration. However, there are strong feelings against Russia in the American Congress, and there is a need for dexterity among the Indian diplomats to ensure that there are no sanctions imposed on India for keeping up defence and high-technology imports from Russia.

There are also indications that Putin played the good Samaritan to bring about a rapprochement between India and China, though both sides have been tight-lipped about the conversation or where it would lead to.