Which pressure points will work on China to make it yield the territory it seized in Ladakh has been a question vexing Indian strategic policy planners ever since the Galwan aggression happened. There have been discussions on the available economic, diplomatic and military options, and their costs. Despite the restraint on the military option, India has been ramping up its preparedness on the long and unsettled border from Ladakh to the northeast, by moving more troops and equipment. Additional warplanes have been sent to the bases, while surveillance devices in satellites, drones and aircraft monitor the gathering of more Chinese troops and the construction of permanent structures. Yet, the option of a surgical strike, which seemed so obvious in the case of Pakistan-sponsored terrorist acts, is not so easy, given the size and strength of the Chinese army and its likely response. The long rounds of military-level talks have not been scaled up to the level of four-star generals who can take decisions, while at the political level, only the foreign ministers have spoken. 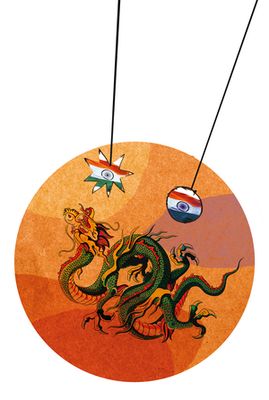 The economic options, too, are limited because of the comparatively moderate economic relations, especially after the virtual halt to Chinese investment in Indian companies, and the overt and covert steps taken by the commerce ministry to discourage exports. Indian businessmen who used to make frequent trips to China now rarely visit Chinese industrial hubs, because of Covid-19 restrictions and the growing negative sentiments towards China. Still, this has only firmed up the new status quo where the Chinese have occupied Indian territories, though the Indian government has not specified how many square kilometres have been lost in the last three years.

India has joined the Quad, which aims to ensure that China follows global rules in the Indo-Pacific. The Indian Navy has participated in joint exercises with other Quad members—the US, Australia and Japan. But New Delhi is not ready to declare the Quad a military coalition, preferring to describe it as an umbrella grouping for non-military purposes.

India has also not shown any public urgency towards suggestions that the Quad should be expanded to bring in South Korea and the UK initially, followed by southeast Asian countries like Indonesia and Singapore, which have close relations with Beijing. During the recent Narendra Modi-Vladimir Putin summit, Russia seemed to have got the assurance that the Quad would not be a military alliance against Russia or its allies, given the hostility of the Biden administration towards Russia.

What should be the China policy for 2022? Experts who have dealt with the northern neighbour in diplomatic services, armed forces and intelligence agencies at the highest levels, feel that the Chinese vulnerability on its restless border territories—Taiwan, Hong Kong, Tibet and Xinjiang—should be exploited. India has not volubly criticised Chinese policies in these territories unlike western democracies, especially the US. Australia, Japan, South Korea and the US have been vocal about Chinese military ambitions on Taiwan, which claims independence. The Taiwanese have been lobbying aggressively to isolate China, even demanding sanctions, for its attitude towards the island. Beijing, however, claims Taiwan to be an integral part of China.

The Taiwanese government has been actively lobbying the Indian government, the strategic community, the business leadership and the civil society to ensure that India supports the Taiwanese cause. Beijing has reacted sharply whenever BJP leaders visited Taiwan or met with Taiwanese officials. India allows a representative office of Taiwan in Delhi which issues travel documents for Indian citizens to visit the island. 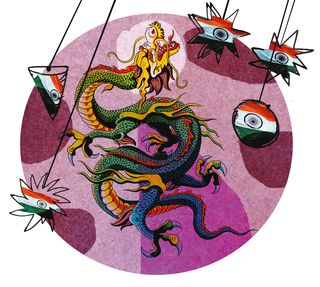 There is, however, a counter argument that the Taiwanese ask for too much and give too little in return. Ever since former prime minister P.V. Narasimha Rao launched the national manufacturing mission, India has been wanting to be a hardware superpower. Four countries were identified by Rao’s manufacturing czar V. Krishnamurthy—the US, Japan, Taiwan and Israel. The US and Japan, which had sanctioned India for its nuclear explosions and for the refusal to sign the nuclear non-proliferation treaty, have been very selective in releasing sensitive and dual-use technology. Though India has been described as a major defence partner by the US, Indian diplomats say American laws have made technology transfer difficult as the US Congress has to approve every important deal.

But Taiwan, which had no reservations on nuclear issues, has been extremely cagey about transfer of technology and has discouraged big foreign investments in hardware technology, despite several concessions given by India. A section of the Indian establishment, therefore, feels that Taiwan is not a low-hanging fruit as far as confrontation with China is concerned, and thinks that India should show some muscle in other Chinese regions which are landlocked. It is a challenge for Prime Minister Narendra Modi’s national security ministerial team of Rajnath Singh, S. Jaishankar, Amit Shah and Nirmala Sitharaman and National Security Adviser Ajit Doval.