The Narendra Modi government’s withdrawal of the three controversial farm laws showed that even strong governments blink under pressure. Pushkar Singh Dhami was in a more vulnerable position in Uttarakhand, so it is not surprising that he, too, has blinked by withdrawing a legislation aimed at bringing temples under state control.

Dhami has been Uttarakhand chief minister since July, but he is more of a nominated CM than someone who had won the mandate. His predecessor, Trivendra Singh Rawat, had provoked priests with his decision to nationalise the administration of 51 temples, including prominent pilgrim centres such as Badrinath and Kedarnath. Rawat had insisted that the protesting priests, and the politicians who supported them, did not have popular backing. But that did not stop the BJP high command from axing him and bringing in a replacement, Tirath Singh Rawat, who was later replaced by Dhami. 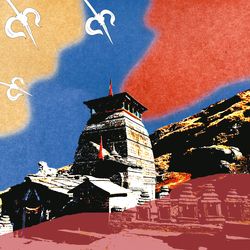 Dhami had also favoured state control of shrines to end administrative anomalies. But the assembly polls, due in months, presented a tight deadline. The belligerent priests even threatened to stop Modi from attending an event at the Kedarnath shrine—if their demands were not met. Dhami had to assure them that he would decide within a month, and requested that they not disrupt Modi’s programme. He has now fulfilled the promise by withdrawing the legislation.

The protests of the priests had won support from dissident BJP leader and Rajya Sabha member Subramanian Swamy, who had long been opposing state intervention in managing the Tirupati shrine in Andhra Pradesh. Swamy had also questioned the control of the Tamil Nadu government over a large number of temples in the state.

A section of the RSS leadership was unhappy with Trivendra Singh Rawat because he was apparently setting a bad example of a BJP government wanting to control temples. The RSS has raised questions about some state governments controlling just Hindu places of worship while not intervening in the management of shrines of minority religions. Rawat was also accused of being guided more by bureaucrats than by party patriarchs in the state.

In his defence, Rawat pointed out how the intervention of Jammu and Kashmir governor Jagmohan had saved the Vaishno Devi temple at Katra. Jagmohan later became culture minister in the Atal Bihari Vajpayee government and was widely respected in BJP circles for cleaning up the cave temples of Ajanta and Ellora. Rawat’s reforms, however, hit a hard wall of the entrenched governing hierarchies, but he refused to backtrack on his decision.

Though Modi wants a single national model on ration cards, taxes and elections, his government has no policy prescription on temple management. It has left the matter to states, since the subject comes under the state list of the Constitution.

But many temples have valuable parcels of land in tony neighbourhoods of metropolitan and tier-II cities. The DMK government in Tamil Nadu says more than 40,000 acres of valuable land have been encroached on over decades. It has begun digital mapping to recover the assets, and recently claimed to have recovered temple land worth Rs1,000 crore in a prime Chennai locality.

But it is not just temple lands that are encroached upon. Uttar Pradesh, Maharashtra, Haryana and Karnataka have reported that wakf land worth thousands of crores have been encroached upon.

There are also allegations that land sharks encourage temple managements to divert land for commercial use, and that large amounts of offerings are deposited in unsafe financial institutions. Thus, many famous and not-so-famous temples have become not just divine attractions, but money magnets as well.