Elon Musk is known as a disruptor par excellence of the American automobile industry as well as the currency and stock markets in the US. The bold entrepreneur has sent shockwaves worldwide with his new generation cars, which are electric powered, and, some, self-driven.

Six years after he took Prime Minister Narendra Modi on a tour of The Tesla Factory in California, the American tycoon seems to be winning the argument over lowering the steep customs duty for import of electric cars to make a significant penetration into the Indian market. Musk seems to have drilled the contradictory dictum that only imports would help in achieving import substitution. Officials of the Union industry and commerce ministry, who want to stick to Modi’s Make in India policy, want Tesla to set up a big factory in India, which could then import full kit for the assembly of electric cars here (a route followed by foreign manufacturers like Hyundai, when foreign investment was allowed in the automobile sector). Musk has preferred to import the full car, test the potential of the Indian car market and only then go for manufacturing. Musk’s only concession was to register his Indian subsidiary in Bengaluru as a research and development centre. But Musk indicated that he is capable of building a large assembly line, much faster than any automaker in the world. 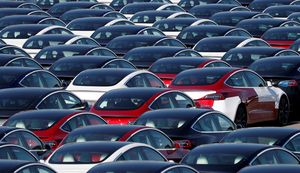 Modi, during the Tesla visit, was impressed with the clean energy option, as he had begun work on his dream of making India the largest producer of solar energy, cutting the dependence on petrol and diesel. The prime minister has remained very silent on the continuous criticism of opposition parties on the steady increase in prices of petroleum products, thereby giving an impression that he wants vehicle owners to realise the cost efficiency of shifting to green fuel options. Already a domestic disruptive start-up, Oyo, has claimed that it has got more than one lakh orders for its electric scooters, which will be delivered home from this month onwards.

The Indian automobile manufacturers are not impressed with Musk’s demand to lower the tariff wall for imported vehicles, despite justification that Tesla cars (even in US) are at the high end of the market and would be highly priced, even if the import duty is reduced from 60 per cent to 40 per cent for cars priced below Rs40 lakh. Bulk of Indian cars sold in the country cost below Rs15 lakh.

Disruption of the automobile market comes with huge costs, as is evident from the way the Union road transport ministry has been struggling with changes on fuel efficiency standards and forming a scrap policy, which encourages scrapping of lakhs of automobiles in short time. The steel industry has remained unconvinced on the usefulness of recycled steel, and add to that the attitude of car owners who baulk at the conversion charges of petrol-diesel cars to newer and costlier clean energy models.

The last disruption of the automobile industry happened when the Supreme Court mandated that public transport vehicles, including buses, taxis and three-wheelers in several urban centres, shift to CNG, reducing the intake of diesel. But the limitations of CNG use meant the switch could not happen in the case of trucks, which haul heavy loads.

If Musk really focuses on the Indian market, which is of low value due to the dollar-rupee exchange rate, then he would disturb the sleep of both competitors and policy makers.