A popular story of Indian mythology is about the ‘race around the world’ competition between Ganesha and Subramanya, sons of Lord Shiva. When they are asked to go round the world to determine who is the fastest, Subramanya sets off on his peacock to circumnavigate the world. The more ponderous Ganesha leisurely makes a pradakshina (circumambulation) of his divine parents, saying they are the world, and he has completed the race ahead of his brother. Some of the ministers who were dropped by Narendra Modi too thought doing the rounds in Delhi was enough rather than going around the country.

Former health minister Harsh Vardhan and former pharmaceuticals minister D.V. Sadananda Gowda had special patterns of travel. While Harsh Vardhan was confined largely to Delhi, despite being entrusted with overseeing the country’s health and science infrastructure and also responses to epidemics, Gowda’s travel was normally from Delhi to his Lok Sabha constituency in Bengaluru. Harsh Vardhan preferred to hold online reviews to making many field visits. 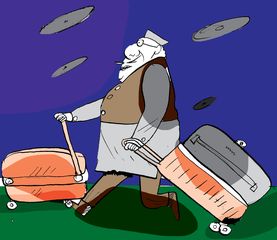 Among the cabinet ministers, it was Defence Minister Rajnath Singh who had travelled extensively within the country in the last two years. Meanwhile, External Affairs Minister S. Jaishankar touched multiple capitals in Asia, Europe, North America and Africa. But the travel diary of Commerce Minister Piyush Goyal, unlike his globetrotting predecessors, has been more moderate.

There are debates whether it is necessary now for ministers to physically travel to different places when technology allows for meeting people from multiple locations virtually. Ministers can also summon officials, technical experts and political personalities to Delhi for meetings. But there is a section of politicians and officials who feels a well-focused visit of a minister would better galvanise the government machinery and personnel outside Delhi.

When Narendra Modi first became prime minister in 2014, he wanted his ministers to travel. As a long-term national office-bearer of the BJP, he liked travelling to get first-hand information, including historical and political details. He told every minister that they must visit Jammu and Kashmir as well as the northeast region once every three months. He had directed ministers and MPs to adopt villages and go around monitoring implementation of his pet projects on hygiene, cooking gas and roads. And, the ministers were in a state of continuous motion. Modi himself was immersed in domestic and international travel.

But in the second term—which was overshadowed by the pandemic-induced restrictions—ministers have played safe by remaining in Delhi, contributing to the general savings in government expenditure. But if Harsh Vardhan, Gowda and Home Minister Amit Shah—who is in charge of disaster management—had travelled more to states to monitor the health and administrative actions to control Covid-19, the responses to the second wave might have been more effective. One explanation given was that they deferred to Modi, who played an active role in interacting with chief ministers and district level bureaucrats, and visited vaccine production facilities in Ahmedabad, Pune and Hyderabad to get first-hand information. Even when cyclones struck the coastal states, it was Modi who went for aerial surveys, though Shah did round-the-clock monitoring and mobilisation from Delhi. However, at the request of state BJP units, both Modi and Shah made many political sorties also into Bihar, West Bengal and other states in the last one year. It is to be seen how different Mansukh L. Mandaviya, the new minister in charge of both health and pharmaceuticals, will act in comparison with Harsh Vardhan and Gowda.