She wears a red cap, but she is not a communist. Her political outfit, the Samajwadi Party, has not fielded a single candidate in the assembly elections in West Bengal. Yet, Jaya Bachchan gets a huge crowd response in the state, as her roadshows and meetings are organised by the Trinamool Congress.

The veteran Bollywood actor, whose family hails from Bengal, makes it clear that her party president Akhilesh Yadav has asked her to help Mamata Banerjee in her campaign. Jaya avoids strong language as she pitches for Trinamool Congress candidates against the BJP. 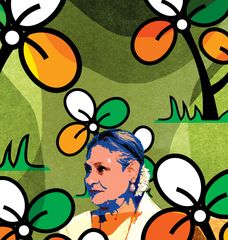 Jaya, who is married to superstar Amitabh Bachchan, has been more vocal than her husband when it comes to politics. Amitabh, who had a brief fling as an MP from Allahabad in the 1980s, has stayed away from electoral politics since then. But he has been close to political leaders from Narendra Modi to Mulayam Singh Yadav. Jaya has been elected thrice to Rajya Sabha from Uttar Pradesh, on a Samajwadi Party ticket.

Mamata wanted regional parties to support her as she had faced the onslaught of the BJP, led by Modi and Amit Shah. Both have continuously conducted personalised campaigns against Mamata, her nephew and the Trinamool Congress.

The Rashtriya Janata Dal of Bihar is lending a helping hand to Mamata. Delhi Chief Minister Arvind Kejriwal has been supportive, but he did not make an appearance in the election campaigns. The Shiv Sena also offered its support to Mamata, but the party has no base in West Bengal for its supremo Uddhav Thackeray to campaign in the state.

The West Bengal BJP relied more on the star power of dancing star Mithun Chakraborty. A chopper has been allocated to him by the party to attend the rallies. Apart from Jaya, Mamata relied a lot on stars from Bengali cinema and television, to match the BJP in terms of glamour. The left-Congress front, which is struggling to be an alternative between the bruising giants, has had less stardust to claim.

On the other hand, the regional parties of other states did not take much interest in the election campaigns in Tamil Nadu and Kerala, unless they had state units in the two southern states. Even though the Dravida Munnetra Kazhagam has shared power with regional parties in the National Front, United Front, National Democratic Alliance and United Progressive Alliance governments in the last three decades, it could not attract the support of dominant parties of other states, because the DMK-led front includes the Congress and the communist parties. Unlike Mamata, who had sent out what sounded like an anxious appeal for support against the BJP, the DMK remained circumspect in soliciting support from outside forces. Even though Tamil Nadu has several Telugu-speaking pockets, the leaders of the YSR Congress, Telangana Rashtra Samithi or Telugu Desam Party from Andhra Pradesh and Telangana were conspicuous by their absence.

Similarly, the contesting fronts in Tamil Nadu did not bring any Bollywood stars, as they had enough of their own from Tamil cinema. Even the BJP relied more on campaigning for women votes by fielding Union Finance Minister Nirmala Sitharaman, rather than yesteryear heroine Hema Malini—who is from Tamil Nadu—though she is a Lok Sabha MP from Uttar Pradesh. Similarly, in Kerala and Assam, too, the firepower for the campaign came more from political leaders, though there was a sprinkling of actors in the contest.

For Jaya, the success of the Trinamool Congress in the constituencies where she had campaigned would not only boost her image but also make her one of the most in-demand campaigners for the SP in the 2022 assembly elections in Uttar Pradesh.