The controversy has once again resurrected the demand that the Army should give up its control of equestrian events and allow a democratic set up to come up. But the Army is in no mood to relent. The EFI has asked the government for five years to adopt the new sports code. The Indian Olympic Association (IOA) has stripped the EFI of its voting rights, but has allowed it to continue as a member. 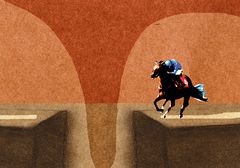 In a country where the horse and pony population has declined from 15 lakh in 1951 to three lakh in 2019, very few horses are used for sporting activities. In the civilian sector, they are used mostly as draught animals or for wedding processions, while the Army and the police forces maintain cavalry and mounted units. The most famous such unit is the President’s Bodyguard (PBG), which escorts the president on ceremonial occasions. A few thousand horses are used for commercial racing in racecourses across the country. Although it is very expensive to maintain those horses and courses, betting makes the enterprise lucrative.

Among the various organisations in the country, the Army has the maximum number of horses in its stables, and it encourages select officers and men to specialise in riding. The three services have more than a million soldiers, sailors and aviators, and they are encouraged to participate in sports as part of physical fitness training and for all-round excellence. Their vast campuses and long training courses offer space and time for sports like racing, shooting, golf, yachting, canoeing and paragliding, as well as for field games like hockey.

When there was not much of a civilian initiative in these sports, it was the military which produced top-notch performers. At the national level, the Services team, with the cream of sportsmen from defence units, was a tough one to beat. Subsequently, national and regional federations of such sports came to be promoted and controlled by the armed forces and it became a prestige issue for senior officers. But the march of the civilian enterprise has meant that many of these sports bodies are no longer dominated by men in uniform.

Officers and men are upset over calls for inquiry about why so many Army units are affiliated as members of the EFI despite IOC rules stipulating that there should only be one association representing one state or entity. The Army, however, has clarified that the working of the EFI is not an Army activity; it has only loaned out its facilities for events and training. Similarly, the Army has said that it does not own any competitive golf course, and all golf courses on its property are part of training facilities for officers and soldiers. Yet, notwithstanding the stink caused by the Nepal fiasco, the Army is unlikely to give up the reins of equestrian sports easily.