A little over a century ago, the Congress began debating the role of religion in politics, especially within the party. It has been a debate that has been conducted by Congressmen, but has been joined by parties both on the right and the left.

Once again, the debate has reached a high pitch as everything the grand old party does is being argued about, with fingers from the political spectrum being pointed especially at the Gandhi family. If the BJP has been pitching hard on the old bogey of minority appeasement, there are figures from the left who accuse the Gandhi siblings’ temple hopping as proof of soft hindutva. Now, some members of the Group of 23, who began a debate on internal democracy in the Congress six months ago, have started questioning the secular credentials, the alliances and half-alliances in the three states going to polls, and the contribution of some Congress leaders for construction of the Ram Temple in Ayodhya. There is once again a demand on deciding what exactly is the ideological core of the Congress, confronted with the twin-challenges of the aggression of the BJP’s hindutva and weakening organisation. 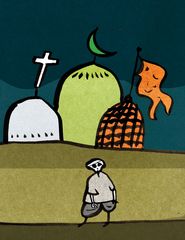 While a century ago the arguing groups were labelled as moderates and extremists arguing over the separation of politics from religion, now there are no such easy labels available. A Rajya Sabha member was heard joking in Parliament’s corridors that the best would be to describe the two sides as “faithful and faithless”, where faith is not in ideology, but the Gandhi family’s control of the Congress. Thus, the Group of 23 led by Ghulam Nabi Azad, Anand Sharma and Kapil Sibal were once completely faithful, but now their faith is shaken. They were all supporters of the high command’s nomination culture that had begun during Indira Gandhi’s time and was institutionalised by Sonia Gandhi. Apart from religion and the two-nation theory which rocked the Congress during the freedom struggle, the party has also seen sharp divisions over economic policy, public sector domination, foreign policy, affirmative action for scheduled and backward classes, and desirability of a cadre-based party.

The recent defeats and setbacks have also forced the Congress to reluctantly or enthusiastically embrace many political and social forces which were considered untouchables in the party’s heyday. The party shares power with the Shiv Sena in Maharashtra which is strident in its hindutva, while the party is now in alliance with parties like All India United Democratic Front in Assam whose politics is antithetic to that of the Shiv Sena. Anand Sharma and Adhir Ranjan Chowdhury—West Bengal unit chief of the Congress—recently had a verbal spat over the party’s tie-up with Muslim cleric Abbas Siddiqui’s Indian Secular Front. Leaders like Shashi Tharoor, who was aghast at the admission of admirers of Mahatma Gandhi’s assassin Nathuram Godse by the Madhya Pradesh unit, have warned against the Congress becoming a lightweight version of the BJP.

An earlier generation of leaders led by Jawaharlal Nehru allowed fierce debate on the political and economic direction of the party. The last time the party did such a soul-searching on its attitude to religious issues was in the Faridabad session of 1993, held after the demolition of Babri Masjid. The role of religion in government and politics was discussed along with the organisational issues. The arguments were won overwhelmingly by the party establishment, but led to a minor split in the party. Now that similar issues have come up, the high command has to decide on the right approach to the questions raised from within and outside the party.