The ‘yes or no’ trap

Battling the perception war on the farmers’ agitation, which has become a challenge to its authority, the Narendra Modi government resembles a mighty warrior forced to fight with his hands tied. After initial attempts by some BJP office-bearers to dub the protesters as having an anti-national agenda, the party realised that the strategy was counterproductive.

As the prime minister himself justified the three farm laws, the government and the party instead trained their guns at opposition parties, especially the Congress. The BJP knows that if the agitation succeeds, the opposition will reap the political benefit, just like the BJP benefitted from the anti-corruption agitations against the Manmohan Singh government. 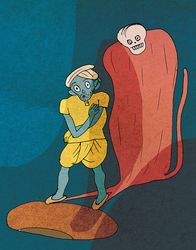 Senior ministers have a lot of ammunition against the Congress as it had championed the very reforms which Rahul Gandhi is opposing now. While Agriculture Minister Narendra Singh Tomar adopted a farmer-friendly approach without actually yielding to their demands, his senior colleagues Ravi Shankar Prasad and Prakash Javadekar blamed the Congress for its double standards. They have noted how the Manmohan-era Planning Commission had got a report done by a committee of chief ministers led by Haryana Congress leader Bhupinder Singh Hooda to abolish the mandi system. They quote the most recent Congress manifesto to show that when Rahul was Congress president, the party had demanded agricultural marketing reforms, which is exactly what Modi has implemented.

The Planning Commission, which Modi remade into NITI Aayog, had prepared several reports to bolster the economy, offering solutions ranging from far right to far left. In 2017, it suggested that rich farmers should pay income tax, forcing finance minister Arun Jaitley to douse the flames by quickly clarifying that the government had no such plans.

Former president Pranab Mukherjee, who was deputy chairman of the Planning Commission during the reforms era of P.V. Narasimha Rao, used to say that the huge cupboards of the Yojana Bhavan had reports which would suit different political lobbies. Among the heads of the Planning Commission were reformers like Manmohan, Montek Singh Ahluwalia, Arvind Panagariya and socialists like Mohan Dharia and Madhu Dandavate. Centrists like Mukherjee, Ramakrishna Hegde, N.D. Tiwari and K.C. Pant, too, had headed the Commission. Its archives would contain reports justifying the continuation of the public procurement system, which the agitators fear would be undermined by the new laws enacted by Modi. But policies change not only under different political parties, but also under the same prime minister so that today’s report could become irrelevant tomorrow. For instance, while negotiating a new global trade agreement under the World Trade Organisation, leaders of the Indian delegation like Murasoli Maran of the DMK and Mukherjee had to navigate contradictory positions and even mutually antagonistic laws. That is why Modi said 21st century India could not be built with 20th century laws.

But the counter argument is that when they were in the opposition, Modi and the BJP objected to laws like GST, but adapted and adopted them after coming to power. Modi and his ministers have the benefit of a strong research facility as the BJP has backgrounders on every subject and an impressive collection of clippings, television speeches and documents of the Congress. The CPI(M), too, is backed by a research department which is thorough in its documentation. In comparison, the intrinsic belief in “Congress culture” makes its members less rigorous in research, even though there are many talented leaders who have mastery over specific subjects. But the farmers’ agitation has avoided divisive debates by demanding a brutally simple ‘yes or no’ answer to their demands, which has baffled the verbose politicians!