Except during some monsoons, the Sarayu is a gentle tributary of the Ganga. But, for the next two years, the river known for its most-famous town, Ayodhya, will be the focus of hectic construction activity. It is not just the grand Ram Temple which will be the jewel of the river, but Chief Minister Yogi Adityanath has also claimed the river to be his own for dazzling development.

If the Sabarmati in Ahmedabad and the Ganga in Varanasi are developed as big riverfronts because of Prime Minister Narendra Modi’s initiative, Adityanath is focusing on the Sarayu to leave his imprint. It is not just the lakhs of lamps lit during Diwali that would make the Sarayu sparkle, but the plans include a 500-acre theme park, the world’s tallest statue of Ram and green walkways. Each year, Adityanath is increasing the number of lamps as the length of the riverfront grows. The government has committed over 01,000 crore for the riverfront land reclamation and beautification.

Urban river landscapes have caught the imagination of not just town planners but politicians as well. Adityanath found that the Gomti riverfront in Lucknow had been lavished attention by both Mayawati and Akhilesh Yadav as chief ministers, with the latter developing new green lungs on a 17km stretch on either bank of the Gomti. Yadav’s government spent 01,500 crore on the development. 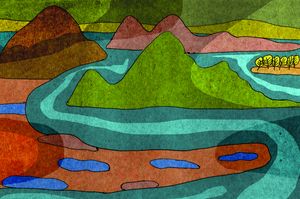 Even the less flamboyant Bihar Chief Minister Nitish Kumar has invested in the development of a 6km stretch of the Ganga, which is the lifeline of Patna, with 16 embankment ghats already built and more planned. According to the plan, thousands of visitors would be able to have fun on the riverfront and watch dolphins in the mighty river every day. Already 0150 crore has been spent and more is intended. In Assam, BJP Chief Minister Sarbananda Sonowal has even bigger dreams for the wider Brahmaputra that flows through Guwahati.

It is not just state governments that are taking up waterfront projects. The Nanded municipal corporation in Maharashtra has finalised a Godavari waterfront scheme for the famous Sikh pilgrim centre. Downstream, MNS leader Raj Thackeray had big dreams of developing the Godavari riverfront in the Kumbh Mela city of Nashik when his party controlled the corporation. But the project is embroiled in controversies and the BJP now controls the civic body.

The biggest dreamboat of all has been the 22km Yamuna riverfront in Delhi, which has thousands of acres of vacant floodplains. As an urban development minister in the Atal Bihari Vajpayee government, jurist Ram Jethmalani had drawn plans for modelling it after the Thames in London or the Seine in Paris. Then, in 2009, chief minister Sheila Dikshit had a plan to develop recreational and ecological parks along it. Now, the Delhi development authority under Modi wants to replicate the Sabarmati model. But the Supreme Court and the Delhi High Court have remained vigilant guardians of the open spaces lining the filthiest river in the country, which has ironically become greener on its banks owing to non-development.

Environmental activists are crying that the spate of riverfront projects would mean putting millions of cubic feet of concrete into the rivers and their embankments, affecting water flow and handing over floodplains for real estate and recreation. But waterfront enthusiasts are jogging on, arguing that planned development actually rejuvenates the river. And in case of chief ministers like Adityanath, it could mean a spike in popularity, too!