Ramdas Athawale of the Republican Party of India (A) has attained the unusual distinction of being the only non-BJP minister in the Modi ministry. Representation of other allies has ended either because of desertion (by the Shiv Sena and the Shiromani Akali Dal) or death (of Ram Vilas Paswan of the Lok Janshakti Party). A dalit activist, Athawale has been a lone wolf in the Maharashtra assembly and in Parliament, as he has not been able to get any other member of his party elected in the last three decades. But he is visually and verbally colourful. His wardrobe is full of coats and waistcoats of multiple colours and designs. He has vowed not to repeat a jacket in Parliament.

Athawale has been a junior minister in the social justice and empowerment ministry. The BJP has granted him a second term in the Rajya Sabha. He had won three Lok Sabha elections in alliance with the Congress, and was also a Maharashtra cabinet minister. But he resisted offers to merge his outfit with national parties, and has enjoyed being in demand during elections. 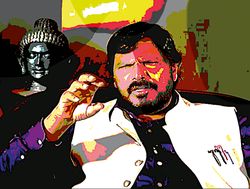 At the joint rallies of the coalition, Athawale is invited for his oratory and his popularity among dalits. At these rallies, he ensures his party’s blue flags and scarves outnumber those of his allies. In 2009, at a rally in Pune for Congress candidate Suresh Kalmadi, which was to be addressed by Sonia Gandhi, managers of the Congress and the Nationalist Congress Party were aghast at the sea of blue flags. They scrambled to get more of their party flags, but the police would not let them in, citing tight SPG security for Sonia. In Delhi, Athawale insisted that blue tiles, normally used in the kitchen, should be plastered onto the outer walls of his ministerial bungalow, though his desire for designer tiles with the party symbol was not granted by the Central government officials.

He has party units in all states and grandiosely announces that the RPI(A) would contest all assembly seats. He has refused invitations to contest on the Congress, BJP or NCP symbol, though it might have better helped his ambition to be a cabinet minister with a weighty portfolio. He symbolises many dalit leaders who prefer to be lions in their small regional dens. Athawale has also been lukewarm to suggestions of bringing together the factions of the Republican Party of India, including the one headed by Prakash Ambedkar.

The Bihar assembly elections would determine the fortunes of some dalit parties like the 20-year-old LJP, founded by Paswan and now headed by his son Chirag, who has cocked a snook at Chief Minister Nitish Kumar. Also in the fray is the Hindustani Awam Morcha founded by former chief minister Jitan Ram Manjhi, who is trying his luck as part of the NDA. In Tamil Nadu, Viduthalai Chiruthaigal Katchi of Thol Thirumavalavan has remained a steady member of the Dravida Munnetra Kazhagam-led front. The VCK is hoping that if the alliance unseats the All India Anna Dravida Munnetra Kazhagam in next summer’s assembly elections, it could have a minister for the first time.

Modi is likely to expand his council of ministers after the Bihar assembly elections. His party has to decide whether it should offer ministerships to other remaining NDA partners such as the Janata Dal (United) and the AIADMK. And whether the LJP deserves a return to the ministry, after causing confusion in Bihar NDA by fielding candidates only against the JD(U) and avoiding contests against the BJP.

The BJP, on its own, has comfortable majority in the Lok Sabha, but needs regional parties in the Rajya Sabha as well as in the coming state elections. If the expansion is limited to only new ministers from the BJP, or if the exercise itself is delayed, Athawale will continue to bask in his unique distinction.