Political office holders across states often meet at conferences based on their designations or the subjects they handle. Chief ministers, assembly speakers, ministers of specific portfolios and even chief whips have conferences. The only political appointees who do not have a meeting club of their own are the deputy chief ministers.

With the dismissal of Sachin Pilot, the Congress lost its lone representative among deputy chief ministers, whose number has now dropped to 24. Among the 28 full-fledged states and two semi-states (Delhi and Puducherry), 16 have the deputy chief minister post—which does not find a mention in the Constitution.

Pilot had a complaint that Rajasthan Chief Minister Ashok Gehlot did not care for him during the one-and-a-half years when they were cabinet colleagues. The ill-treatment of Pilot is one of the “grievances” which will be examined by a Congress committee headed by Priyanka Gandhi Vadra.

But Pilot’s case is not in isolation. When Karnataka’s B.S. Yediyurappa government celebrated the completion of its first year, Laxman Savadi, one of the three deputy chief ministers, skipped the celebrations and went to Delhi to complain to the BJP high command that he was being ignored by the state strongman. Apart from the trio, Yediyurappa has a former chief minister and two former deputy chief ministers in his cabinet, and has omitted all six from his kitchen cabinet. Yediyurappa was shocked when the high command ignored his preferences last year and forced the trio on him. 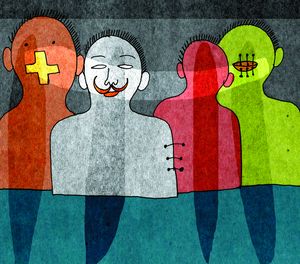 Unlike Yediyurappa, Uttar Pradesh Chief Minister Yogi Adityanath has had a smooth sailing with his two deputy chief ministers—Dinesh Sharma and Keshav Prasad Maurya. In the last three years, the chief minister has climbed high in the party hierarchy and expanded his popular base. If the most populous state in the country has two deputies, so does tiny Goa where the BJP is on a continuous poaching expedition to ensure that numbers are shored up to prevent a raid from the Congress.

Gujarat’s deputy chief minister Nitin Patel had made his displeasure known when he did not get a politically big portfolio. But once his demand was accepted, his working relationship with Chief Minister Vijay Rupani improved.

Even though he has no challengers within the party and has a massive majority in the state assembly, Andhra Pradesh Chief Minister Y.S. Jagan Mohan Reddy has created a national record for maximum number of deputies. Not two or three, there are five in the mid-sized state. Reddy has picked the five from five different castes and religions to show that he has a rainbow government.

In neighbouring Haryana, all eyes are on young dynast Dushyant Chautala, whose great-grandfather Chaudhary Devi Lal was deputy prime minister in two short-lived governments. As deputy to the BJP Chief Minister Manohar Lal Khattar, Chautala is vying to build his Jannayak Janta Party at the expense of main opposition party, the Congress.
With peace returning to Rajasthan, the Congress, too, may soon have a representative among the country’s deputy chief ministers.