Trains for the future

The power to dream big in times of difficulties is both brave and poignant. For the Indian Railways, the pandemic season has been a very shrinking experience. From the normal of 13,500 passenger services a day across the country, it is just plying 230 special trains. Several of these trains are running empty, even with Covid-related restrictions on coach capacity.

The national carrier’s budget has taken a hit by the loss of Rs40,000 crore in five months, forcing the Rail Bhavan to suspend all developmental activities, and allowing only safety-related works to continue. 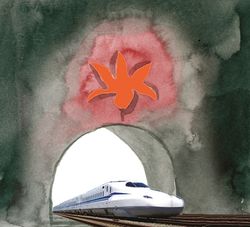 Yet, there is one exception to the curfew on new projects. The Railways is pushing ahead with the prime minister’s dream project of a 300kmph bullet train between Ahmedabad and Mumbai. The Railway Board’s optimistic chairman, V.K. Yadav, with strong support from the PMO, has again green signalled the project, which has been mired in difficulties ever since Narendra Modi and Japanese Prime Minister Shinzo Abe laid the foundation stone in 2017 for the mega project costing more than one lakh crore rupees.

The project, which gets Rs80,000 crore soft loan from Japan, has been delayed because of hitches in acquiring 1,434 hectares of land in Maharashtra and Gujarat. Even when Maharashtra had a BJP-Shiv Sena government, land acquisition, which included the prized Mumbai Terminus (Bandra Kurla Complex), proved complex. Now difficulties have multiplied, as the Shiv Sena-NCP-Congress coalition has no enthusiasm. Even in the BJP-ruled Gujarat, there were strong protests by farmers, and the leader of the agitation has been persuaded to join the BJP, smoothening the tracks.

The disparity in land acquired is clear—76 per cent in Gujarat and 24 per cent in Maharashtra. But the government wants tendering to begin during the auspicious Diwali time.

The constant for the project has been Abe, who, in May 2013, signed a memorandum of understanding with Manmohan Singh for a feasibility study to be conducted for high-speed rail corridors in the country with Japanese collaboration. But, it was Modi who catalysed the first segment on the 508km stretch between Ahmedabad and Mumbai.

The project has been criticised as one of the prime minister’s vanity projects, along with the Central Vista scheme for a new Parliament and government buildings in Delhi. But Modi has strongly advocated that India has to enter the high-speed rail league of Japan, China and France. Interestingly, the Railway Board has now proposed six more high-speed corridors, two of which link Modi’s Lok Sabha constituency, Varanasi, with Delhi and Kolkata. The national capital will also get linked with either bullet trains or semi-bullet trains (of 200 to 250kmph) with Ahmedabad and Amritsar. Mumbai will get additional links to Nagpur and Hyderabad, while the southern representation will link Chennai with Mysuru.

Ironically, even if the land acquisition is completed and the Maharashtra government cooperates fully, the first train, with each passenger paying Rs3,000, will run from Ahmedabad to Mumbai only in December 2023. The original date scheduled was August 15, 2022, which marks 75 years of India’s independence. It would be just ahead of the next Lok Sabha elections and would not be a handicap in campaigning on government’s achievements. Even as the bullet train track is being developed, the Railways is keeping a weary eye on the track of the Covid pandemic, which has gone spreading beyond official deadlines.