The chief ministers’conclave was started by veteran leader L.K. Advani in the early 1990s. There was strong emphasis at that time on implementation of the promises made by the party in its state-level manifestos. The meetings discussed organisational issues, too. The state governments were also advised to assist party activists in neighbouring states. The tenure of A.B. Vajpayee as prime minister from 1998 to 2004 saw a different dynamic, as the chief ministers could get to interact with multiple Union ministers and demand better deals for their states.

The geographic spread of the BJP in states shrank last year, after the party lost a series of regional elections. But the inorganic growth through defections has brought back the party to power in Karnataka and Madhya Pradesh.

Karnataka Chief Minister B.S. Yediyurappa celebrated his first year by ensuring that all those who defected from the Congress and the Janata Dal (Secular) were accommodated in the state legislature, even while placating two dozen party loyalists with chairmanships of boards and corporations. 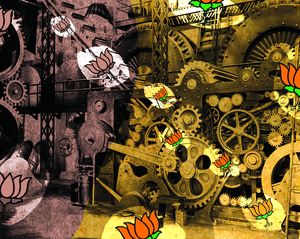 In Madhya Pradesh, Chief Minister Shivraj Singh Chouhan accommodated loyalists of Jyotiraditya Scindia, who had helped topple the Congress government, while holding out the promise to accommodate disgruntled BJP legislators.

Since 2014, the party’s central leadership has been keen on receiving report cards from the states on implementation of the Central schemes and on how they are popularising the work and message of Prime Minister Narendra Modi. The party is worried that anti-incumbency has become a greater phenomenon in the states in the last three years. Among the current chief ministers, only a few were projected prior to elections. Yogi Adityanath in Uttar Pradesh, Jai Ram Thakur in Himachal Pradesh and Trivendra Singh Rawat in Uttarakhand were all post-electoral surprise choices.

Two of the states where the BJP is in government, Bihar and Assam, are going to the polls soon and the party is anxious to retain power there. It has launched a fierce digital campaign in Bihar and has declared that the alliance will be headed by Janata Dal (United) supremo Nitish Kumar once again. In Assam, the electoral activity will pick up after the monsoon.

The focal point in the conclaves now is Uttar Pradesh, where Adityanath has been running a brute-majority government. His main focus is on policing and economic development. His war on criminals has had its successes as well as controversies. Adityanath’s tough attitude towards minorities has also been questioned, but the party justifies it as a correction to the appeasement policies of the previous government. Adityanath has bet big on industrialisation and, supported by Modi, is jacking up infrastructure so that foreign and domestic investors flock to Uttar Pradesh. But electoral delivery will still be a challenge for him as the party’s Lok Sabha sweep is credited only to Modi.

Nadda, who is out to prove himself as a strong organisation man, is pushing the chief ministers hard to popularise not only the Union government’s 020 lakh crore stimulus package, but also the human touch of the relief provided by the government through free rations and subsidies.