The Indore district administration in Madhya Pradesh is baffled on one aspect. The district is one of the Covid-19 hotspots in the country and officials are sure that most of the carriers got off flights from Dubai, the city’s only international airlink. Not all passengers were subjected to a fever check on arrival, nor was an effective self-quarantine system followed. The administration wishes it had received advice in advance on how to handle the airport. A consequential speculation is that Indore would have fared better if powerful ministries at the Centre had read their tea leaves—in this case, E-grams from Indian ambassadors abroad—and joined the dots.

E-gram is the governmental term for telegram in the internet era. Ambassadors and high commissioners of all countries keep the highest powers in their governments aware of what is happening, including confidential information and advice. In India, the recipients are the president, vice president, prime minister and a few top ministers and bureaucrats.

There are also E-grams meant only for the eyes of the prime minister, containing communication from a foreign head of government and other ultra-secrets. During the negotiations for the civil nuclear deal with the US, the ambassador in Washington would brief only Manmohan Singh, keeping others out of the loop. 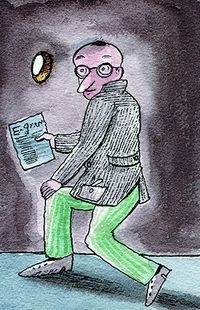 If the E-grams received from China, Iran, Iraq, Italy and other countries since January had reflected the developing crisis, then there was a shadow between information and action in sealing the air borders. Vikram Misri, Indian ambassador to China, who had been arranging for the evacuation of Indians from Wuhan, has kept his ear to the ground on the virus spread and is now coordinating imports of testing kits and personnel protection equipment. As have the ambassadors in other highly affected countries.

Returnees anxious to avoid enforced self-quarantine came via countries that were not in top priority screening. Airports in the Gulf were main transit points for those who had been to Europe and North America. The crisis showed that the Bureau of Immigration was overstretched as there has been an explosion in air travel. The bureau’s leadership, which had earlier dealt with SARS and Ebola entering India, is now using the lockdown period to tighten security gaps that can let in disease carriers. The crisis shows that even top bureaucrats like the cabinet secretary and home secretary need to read the foreign reports in detail and act upon them.

During the rule of prime minister Atal Bihari Vajpayee, an E-gram sent by the Australian high commission had caused an international storm of queries. The Australian diplomat had reported that an Indian finance ministry official had privately said that India would not take any more foreign loans. The Australian foreign ministry asked missions in multilateral lending organisations to check. Other countries, too, wanted to know whether one of the world’s largest borrowers was changing its policy.

Finance minister Jaswant Singh used his diplomatic skills to manage the queries, as there was only loud thinking that the NDA government should shed the borrower image of the Congress days. But wise counsel said it was prudent to borrow at no interest and repay it over a long period, rather than borrowing from the market.

Unlike other democracies, Indian governments have never released the E-grams (and earlier telegrams), treating them as permanent official secrets. Even historians writing on independent India’s policies have depended on E-grams released by western countries, written by their ambassadors posted in India. But in the present, it is critical for the restricted readership to read the E-grams and act in real-time.