The jail portfolio is not a priority on the list of new ministers, who always covet ministries that have either huge budgets or high visibility. Normally, chief ministers add another smaller portfolio so that the minister for prisons is spared from banter of colleagues and critics. In Punjab, too, Jails Minister Sukhjinder Singh Randhawa has been given charge of the heftier cooperation department. But it is as the man responsible for the state’s 25 jails that Randhawa is at the centre of a political storm.

If the opposition Akali Dal has accused Randhawa of protecting the state’s notorious gangsters, he has found a defender in Chief Minister Captain Amarinder Singh, who has ordered a police inquiry into the nexus between gangsters and the Akalis, especially former chief minister Parkash Singh Badal and son Sukhbir. The Badals last ruled the state for a decade, and Amarinder says he has shown photo evidence to the governor about the criminal links of the Badal family. 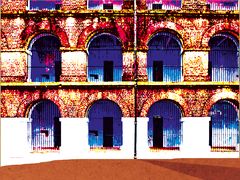 Sukhbir, who was deputy chief minister and home minister, held a demonstration in Batala, accusing Randhawa of not allowing the police to fully investigate the murder of an Akali Dal leader and also alleging that Randhawa openly advocated support to drug mafia, as evidenced by a leaked video of the state’s cabinet meeting. The state’s prisons hold around 3,000 inmates (Delhi’s nine-prison complex at Tihar has more than 10,000 inmates), but organised gangs are a menace in the border state.

If the chief minister’s photographs show Bittu Sarpanch, a politician accused of sheltering members of the dreaded Gurpreet Sekhon gang, felicitating the Badals, Sukhbir has a photo showing Amarinder inducting Bittu into the Congress during an election campaign in 2017. Randhawa says he has sacked or suspended or demoted more than three dozen jailers for aiding dreaded prisoners to smuggle in mobile phones and to run extortion rackets.

The country has around 1,500 prisons, with an inmate population of around four lakh. Though the heads of prisons are on deputation from the police department in most states, the staff, including jailers, are from the prison service. It is an opaque world behind the high walls and locked gates, occasionally glimpsed by the visit of judges, lawyers and social activists. The powerful prisoners use bribes and threats to get access to the outside world, especially through use-and-burn SIM cards. Many material and human comforts, which costs high sums, are also smuggled in. While normally younger ministers get the prison berth, Uttar Pradesh Chief Minister Yogi Adityanath decided to keep the jail portfolio with him. He has a junior minister of state to assist. But he pushed forward his agenda against mafia dons—surrender or get hit in encounters, the police now tell gangsters.

Jail ministers also face enormous pressure to ensure that high-profile inmates get parole for family celebrations, condolences and medical treatment. The Delhi High Court took a dim view of the way former Haryana chief minister Om Prakash Chautala, convicted for a ten-year term in a recruitment scandal, was frequently getting parole on medical grounds, but indulging in political activities. When the Akalis ruled Punjab, Chautala even tried to get transferred from Tihar jail to a Central prison in Punjab, as he thought that parole rules would be lax there and his rapport with the Akali Dal would help.

Meanwhile, Randhawa is confident of a clean chit from the Punjab director general of police, but the Akalis want the probe to be conducted by a Central agency as they have no faith in Amarinder’s police. Some gangsters behind bars must be having a laugh over the squabble among the state’s politicians.